A Brief History of the Sneak Preview

The Sneak Preview is now officially 26 years old in southern Oregon. It was first published on July 28, 1986, in Grants Pass and started as a twice-monthly newspaper, distributed free on the stands. 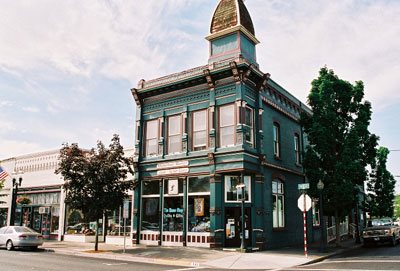 Downtown Grants PassI'd been living back and forth between Grants Pass and Denver for ten years. Denver at that time had a couple of free newspapers that I thought were fun alternatives to the dailies. It was during a five-mile run through Washington Park in Denver on April 10, 1986, that I came up with the idea of starting a free newspaper in Grants Pass.

In July I put the idea into motion and printed a four-page mock-up of what the paper would look like. Along with a fellow ad salesman, I pitched the idea to local businesses, and within two weeks we had our first issue on the stands.

No one in Grants Pass gave the Sneak Preview any chance of succeeding, but by concentrating solely on local news and keeping the articles fun and lively, it was an instant hit.

Amazingly, I had no background in newspapers (except for publishing a free newspaper on the playground when I was in 5th, 6th and 7th grades). I had a degree in Social Work from Indiana University, a teacher's certificate, a Masters in Public Administration from I.U., and a Masters in Biology from Colorado, but had never taken a class in journalism (except for a high school class, but I got kicked out of that because the nun said I had a bad attitude).

For the first six months we contracted to have all the copy typeset at a print shop, and then pasted and assembled it at our office. It was a little expensive, so we bought our own phototypesetting machine in January 1987. In November 1988 we entered the computer age and bought a MacIntosh Classic with a 6" x 8" screen. It made things so much easier that we went weekly in Grants Pass in March 1989. 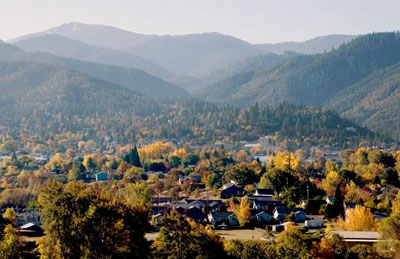 View from above AshlandBy that time, I'd met my wife Penny and moved to Ashland. In 1990 my sister Laurie moved out to bond with my 8-month old daughter Juliet. She loved the area, and I told her if she sold the ads, I'd start a Sneak Preview in Ashland.

At that time there were two other monthly newspapers in Ashland, and to gain an edge, we started off as a weekly. That meant I (and a very small staff) were doing two newspapers a week for a year, and to be truthful, I don't know how I stayed out of an insane asylum during those days.

It was in 1991 that we discovered the power of direct mail, and by 1992 both the Ashland and Grants Pass newspapers were in the mailboxes. It was an easy decision to make because the advertisers practically salivated over the fact that they were in the mailboxes of everyone in town.

After my dad died of a stroke in 1997, I decided it was best to slow down, and both Grants Pass and Ashland became monthlies.

So there I was in my comfort zone in 2006 when my nephew Nathaniel and his wife Kasey moved to southern Oregon. Nathaniel is an accomplished artist and a great caricaturist. In fact, we collaborated on a deck of political playing cards in 2004—I did the writing, and he did the drawings.

I put Nathaniel to work for me part-time, and one day he asked why I didn't have a paper in Medford. I told him it was something I'd thought about over the years but just didn't have the time or energy to tackle it. A couple of days later he announced that he and Kasey wanted to do a Medford Sneak Preview, that they thought Medford was a fun town on the move, and that it deserved a lively, upbeat free newspaper as an alternative to the daily.

So it was redux 1986 and 1990. We put together a mock-up and I even went around and helped them sell ads for the first couple of weeks. Since then, they have been on their own, and the result has been fantastic.

In April 2008 Nathaniel and his friend Ron Rivard started the "Talent News & Review," direct mailing to 5,000 homes. I'd advised them not to call it the Sneak Preview, since there were already three of them floating around and things were starting to get confusing.

Today, advertisers in Southern Oregon can reach Grants Pass, Medford, Talent and Ashland, or any combination therefore. The combined circulation is 95,000, which means on the day we come out, we are the second largest publication in the state of Oregon after "The Oregonian."

the Sneak Preview gets results!

Why will you get results? PEOPLE READ THE SNEAK PREVIEW! Our upbeat & lively publications have been resting on coffee tables for over 26 years...with a circulation of nearly 100,000 copies a month, the Sneak Preview will help you reach your audience in the Rogue Valley. Contact us to set up a marketing campaign