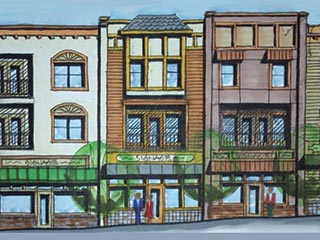 When former Ashland Assistant Planner Mark Knox and his wife paid a visit to his wife's family in 1993 in Corvallis, his mother-in-law nudged him to apply for a job opening in Ashland.

"It appeared to be too soon, as I was advancing in my career in the Sacramento area," Mark said. "But when we got back from that trip, the best possible thing happened ... we were robbed. The rest is history and within two months we had moved to Ashland where I started as an Assistant Planner."

Mark worked for the City of Ashland alongside John McLaughlin and Bill Molnar, who both believed in "human scale" planning, sustainability, and mobility. After 13 years, though, he felt it was time to move on.

"I realized I no longer wanted to have 23,000 supervisors," he said. "Besides, I thought I could do just as much for my community on the outside by managing development applications to fit the City's objectives. The current development along Lithia Way is a great example."

Thus was born Urban Development Services, which Knox oversees from his office in Meadowbrook Park, at the top of North Mountain Avenue.

"Meadowbrook is part of the North Mountain Park Master Plan, which is an area that most Ashlanders don't seem to notice," he said. "As one of the principal planners then and now, I think it's exciting to see the area slowly become a full-service neighborhood with parks, commercial uses, and a mixture of housing types, including single family, townhomes, apartments and condominiums. The central plaza space was always intended to function like the Downtown's with lots of synergy and happy people milling about. That's likely to take another year or two when the remaining three 3-story mixed-use buildings surrounding the plaza are finally completed."

As owner of Urban Development Services, Knox consults with both private parties and public agencies to address their land-use objectives. "My style is to work with a municipality's growth policies and standards in order to create the best outcome," Mark said. "Sometimes the standards conflict, which can force a less desirable outcome, but in those cases I tend to push back, which often leads to further discussion among the community and decision makes, hopefully with a better result. Just because it's code doesn't necessarily mean it will result in a better product."
Mark also worked as a part-time Planning Director for the City of Talent from 2008-2013, helping to attract Brammo and OSF to town, while assisting with the new Camelot Theatre building. He's also heavily involved in the planning and development of Ridgeview, a 12-unit townhouse project along North Mountain Avenue.

Get 'n' Gear Expands Its Storefront 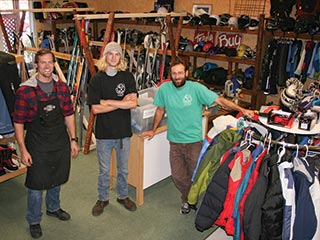 When my ne-phew Greg Hay-den decided back in 1994 that he wanted to float the entire length of the Missouri River in a canoe by himself, everyone in the family thought he was crazy. He'd already floated the Ohio, Mississippi and Tennessee Rivers, but vast swatches of the Missouri are just huge lakes in the middle of nowhere ... and it was 2,341 miles long!

But the guy got 'er done, and three years ago repeated the excursion with a buddy, this time going all the way to New Orleans. He also added the Yukon River to his list of accomplishments a few years back.
Definitely an outdoor enthusiast, Greg had been living in Fairbanks, Alaska, since the early 90s but came to Ashland quite often to visit family. In 2007, he decided to move here full-time and bought Get 'n' Gear, a store at the corner of 3rd and A Street selling, trading and consigning outdoor gear and bicycles.

"I've always enjoyed outdoor activities and used to shop at Get 'n' Gear when I visited Ashland," Greg said. "It was actually started by Cantril Nielson as Full Circle Sports in 1997. Shona Stargill bought it in 2004 and changed the name to Get 'n' Gear. I thought it would be a cool business to own."

Under Greg's management, the store has outgrown itself, and on October 20th, he added an 800-square-foot expansion by moving into the business next door.

"We were running out of room for all the clothing and equipment we had," Greg said. "We added a whole bunch of clothing racks, and I went up into the attic and brought down 16 bags full of winter clothing that I had stored. It didn't take long to fill up the new space."

Get 'n' Gear offers a great selection of bicycles, as well as outdoor gear for camping, boating, skiing, snowboarding and snowshoeing. There's also a lot of outdoor clothing and footwear, as well as team sports gear, skateboards, longboards and ice skates. In addition, they rent bicycles, downhill skis, cross-country skis and snowboards.

With Greg at the helm, customers can expect a casual, friendly atmosphere and a large variety of gear at reasonable prices. The store is located at the corner of 3rd and A, with the entrance on 3rd Street. Call 541-482-5181 for additional info. 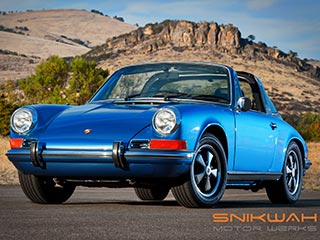 It's fairly safe to say that snikwah motor werks is not your typical main street storefront retail business. Owners David and Sue Hawkins have such a love and affinity for German cars that in 2012 they decided to turn that passion into a business.

"The sounds, the smells, and the unique personalities of German cars are unforgettable," Sue said. "Both of our first cars as teenagers were late 60s/early 70s Beetles, and the memories are still there when we step inside one of these beautiful cars. In February 2012, we decided to turn our love of German cars into a business."

Snikwah is a small car dealership that specializes in sourcing, restoring, renting, and selling unique and typically older German cars.

"We recently restored a 1971 Porsche 911, and we have several projects in the works, as well as a few gently-used German cars for sale," David said. "We provide a zero-pressure, honest experience with a warm, intelligent, and fun staff. We truly love what we're doing and we enjoy sharing it whether in person or virtually via social media."

Sue was born and raised in Ashland, while David's family moved to Oregon from Southern Cal in 1976. He has spent most of his time in Ashland. The outdoors have been a big part of the Hawkins' life, and a few years ago they became a local dealer for Yakima racks and systems.
"As dealers, we offer the full line of Yakima products with free local installation and education," Sue said. "If we don't have what someone is looking for in stock, we can have it on hand within or day or two, and on their vehicle in time for their next adventure. We've also added Yakima rentals, and next year we'll be adding Volkswagen Westfalia van rentals."

Snikwah also has Yakima bags, boxes, and trailers available for rent if someone wants to try out a system before they commit to a purchase. "They might only need a cargo box once or twice a year, and it isn't economical or practical for them to own and store their own box," David said. "That's where our Yakima rentals come in, and if they decide to buy a cargo box after they rent one, we'll gladly apply their rental cost to the purchase price within thirty days of their rental."
The company is also a dealer for LibertyMountain.com, selling and renting outdoor camping accessories and adventure equipment.

The hours are by appointment only (phone or text 541-227-1758, or email This email address is being protected from spambots. You need JavaScript enabled to view it.). And you can check out their webpage at snikwahmotorwerk.com or like them on Facebook. 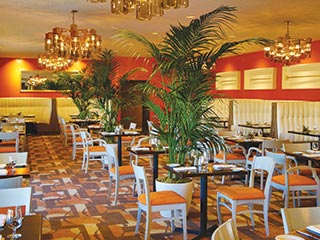 It's always nice to get out of town every now and then, and when you're in Medford, it would be good to check out the new Larks Restaurant, located at 200 N. Riverside Avenue inside Inn at the Commons (formerly the Red Lion).
The restaurant is part of Doug and Becky Neuman's portfolio of businesses under the Neuman Hotel Group, including Ashland Springs Hotel (with the original Larks Restaurant), Lithia Springs Resort, Waterstone Spa, Inn at the Commons, and the Ashland Hills Hotel & Suites.

In 1986 the Neumans moved to Southern Oregon from Santa Barbara. Their lives changed when they decided to buy Lake of the Woods Resort and the old Mark Antony Hotel in Ashland. "I absolutely questioned buying the Lake of the Woods at that time, but Doug was certain that was what he wanted to do," Becky said. "And now I see that by following his dreams and giving him full support, I was able to realize my own dreams."

"By nourishing relationships with Southern Oregon farmers and producers, we ensure the health and well-being of our customers and our community," Damon said. "We work closely with 24 purveyors whose specialties inspire our menus and daily specials."

For example, a starter of tempura-fried green tomatoes begins in the fields of Blue Fox Farm in the Applegate. A crème infused with Oregon Coast-grown wasabi root elevates this Southern comfort classic, perfectly paired with a sweet glass of Silvan Ridge Muscat.

"We feature timeless favorites, such as succulent friend chicken breast with bacon pan gravy, and hearty meatloaf with silken-mashed potatoes," Damon said. "Velvety butter lettuce is the canvas for our updated wedge salad with house-cured bacon, egg, tomato and blue-cheese dressing. These and many other greens are aquaponically and sustainably grown at The Farming Fish in Rogue River."

From enticing appetizers to decadent desserts, every plate at Larks upholds their belief in the beauty of the meal.

Larks is open seven days a week for lunch, dinner and weekend Brunch. Call 541-774-4760 for visit LarksRestaurant.com for menus and more info.