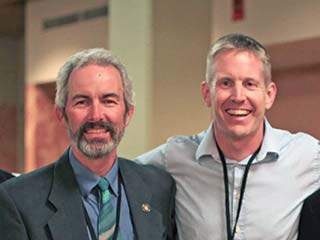 "Our knowledge-able, friendly staff and team of doctors are waiting to assist you," Alex said. "If you quality for a card, it is your right to have one. Over 50,000 patients in Oregon have achieved a better quality of life with medical marijuana. At our office, people can expect top-end professional service while being treated with the utmost respect and care."

Alex has been coming to Ashland since 1994 to visit his sister Paige, who did a stint with the Oregon Shakespeare Festival. "I'm originally from Minneapolis and moved permanently to Ashland in 1998 when my parents retired here," he said. "I spent eight years in Europe and moved back here for good in 2006."

He has also been a cannabis activist for the last twenty years. "My mentor was the late Jack Herer, author of The Emperor Wears No Clothes, whom I met in 1993," Alex said. "I have also worked with Dennis Peron, Ed Rosenthal, Cypress Hill, and Debby Goldsberry. I helped produce the biggest cannabis gathering ever in Golden Gate Park in San Francisco in 1994 with the band Fishbone. There were 40,000 people there. I also ran a concert venue for the High Times Cannabis Cup in Amsterdam for five years."

For the last year, Alex has also been organizing cannabis business conferences to help "prepare people to be optimally positioned in the marketplace with proven business and legal strategies developed by experts all over the world."

The latest gathering, the International Cannabis Business Conference, will be held September 13-14 at the Oregon Convention Center. "Participants will learn from, and network with, the top lawyers, politicians and business leaders in the industry," Alex said. "With two full days of presentations and networking events, you'll depart with renewed confidence in whatever business venture you have in mind."

Alex is proud of how Ashland Alternative Health has helped professionalize the industry. "We were the first medical marijuana clinic in the country to advertise on network TV," he said. "We concentrate on doing our job well, and that is to provide OMMP cards for those who need one."
For more info, the phone number is 541-488-2202 or go to ashlandalthealth.com.

The Haven Opening Soon in Ashland 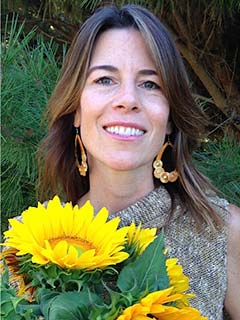 The Haven: "A Cultural & Healing Center" located at 1970 Ashland Street (corner of Faith) is an ambitious healing arts center inspired by the vision of long-time Ashland resident Em Claire. It will offer life-affirming, planet healing, humanity-harmonizing classes and events at reasonable prices.

"My passion is to lessen suffering in the world, and the Haven is a dream I had back in January to achieve this kind of aim on a local level," Em said. "We are applying for nonprofit status, and we aim to offer as many high-quality healing modalities to the public as possible, at a rate of $5 for any class, Monday through Friday, with myriad events on Saturdays and Sundays that may range from $10-$20 as fundraisers for the Haven."

Em grew up in Ashland and is a graduate of Ashland High School. "My parents were born in the Northwest, and in their late 20s recognized the importance of living in a conscious community," she said. "They moved here when I was four years old. The Haven is born from the influence that people living here had on me, many of whom were pioneers of the Ashland Food Co-op."

Em was a practicing massage therapist in Ashland for 15 years, and in her early 30s opened the Downtowne Coffeehouse in Talent.

"Shortly after selling the coffeehouse, I met my husband Neale Donald Walsch, with whom many are familiar through his writings. I also began writing poetry, and from it two books were published: Silent Sacred Holy Deepening Heart and Home Remembers Me: Medicine Poems from Em Claire."
While the Haven is hosting a co-creative dance workshop, Cocréa, on September 20-21, they won't officially open with classes until following their Open House weekend on October 18-19.

"The vision of the Haven was made manifest and brought to life through the dedication and help of many," Em said. "It's easy to dream something up or to have a desire, but to put in on the ground is the work of many hands and hearts. The most useful thing in my life these days is remembering that my life isn't about me, but it's about those whose lives I touch. My husband Neale says this often, and it's one of the teachings he believes in and shares with others." 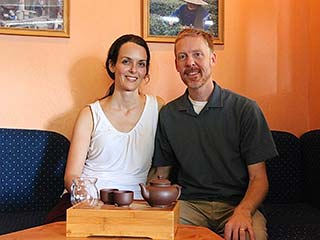 The newest business to open in downtown Ashland is Dobrá Tea, located at 75 N. Main Street at the corner of Granite. Owners Travis and Nicole Peterson actually met over tea in 2002 while living in Portland. Their careers took them to Asheville, NC, where Travis eventually left his career in public health to work in a Dobrá Tearoom.

"I wanted to acquire the knowledge and skills to enter the trade in the future," Travis said. "The Dobrá Tea environment is designed to offer customers a place to relax and leave the world behind them. It seemed that practically every city or large town in Oregon had a tearoom, and we thought it would be a natural fit for Ashland."

The tearoom is dedicated as a space for enjoying quality loose-leaf teas from around the world, each prepared in a manner honoring its country of origin. There are over 100 choices on the menu, and teas have been selected from China, Japan, Taiwan, Korea, Vietnam, India and Africa. There are also caffeine-free options and locally sourced herbal blends.

"We have five types of seating areas, each providing different experiences," Travis said. "There are rattan tables and chairs, a cushioned bench section, low tables with floor cushions, a bar area with stools, or an outdoor porch seating area. When new customers walk in, they will immediately notice the aroma of tea in the air. In-house tea drinkers are provided a menu and a small bell for ringing once a tea selection is made."

Travis pointed out that the tearoom is for everyone. "In the minds of some, a business committed to tea could appear a bit bourgeois; yet it's quite the opposite at Dobrá Tea," he said. "While we believe in quality tea, the space is inviting to all, from students to the elderly; from tourists to local folk; or from those who are versed in tea to those who are not. All are welcome and will find the tearoom relaxing. There is something for everyone."

Dobrá Tea also offers a light fare menu with food choices such as hummus, babaganoush, pita, miso soup, chèvre, and olives. Every item on the menu is gluten-free, including the sweets baked in-house.

"We also offer to-go hot and chilled teas and a very diverse loose-leaf bulk section," Travis said. "In addition, various teaware and pottery are available for sale. We like to think of Dobrá as a community tearoom. While it is a space for individuals or groups to enjoy quality tea and time, it is also intended to serve as a space for regional music, educational venues, and events that match the tearoom theme."

Getting Healthy at NW Raw 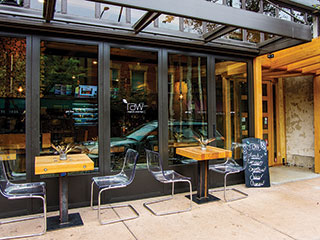 Every morning, in lieu of bacon and eggs, I make a health smoothie that is packed with all kinds of goodies, like vitamins, minerals, supplements, anti-oxidants and probiotics. It's something I think everyone should do if they want to improve their overall health.

It's quite an operation, and to make life easier I should go to NW Raw, an organic juice bar which recently opened at 370 E. Main. Co-owner Web Staunton, along with his wife Karen, knows his stuff. He was raised in the farming industry and opened his own business in the Rogue Valley in 1982, spending 17 years in human resources and five as a corporate administrator.

"Those decades in a sedentary lifestyle left me in less than optimal physical condition," Web said. "So I implemented a juice cleanse. Nearly 30 pounds later, I had beaten Rheumatoid Arthritis without pharmaceuticals and tackled my autoimmune disorders. That is one of the reasons I opened NW Raw—I wanted to offer the community this life-changing raw, cold-pressed option."

"For health-conscious lovers of raw organic juice and superfoods, they will find that locally grown raw juice and organic fare provides the healthiest, purest and best form of nutrition available in Southern Oregon," Web said. "At NW Raw, we use only locally sourced, organic foods cold-pressed for optimal nutritious benefits for your body, mind and soul."

NW Raw is definitely a family effort, as Web and Karen called on friends and family for branding, design, and the actual remodeling and building of the space. The crew was hand-picked by the management team, and they are all friendly and knowledgeable about their product.
"Ashland is the health conscious hub of the Rogue Valley," Web said. "We have partnered with the community to provide a place where the outdoor/health enthusiast can come, sit, sip our special raw cold-pressed juices, and nibble on our delicious, simple, raw fare in a comfortable and healthy setting."