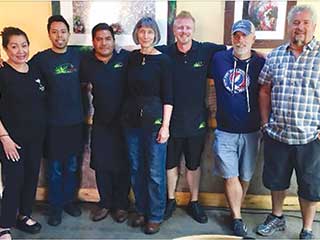 It was a fun day on September 28, 2018, when Agave, 5 Granite Street, was featured on Guy Fieri’s Food Network show, “Diners, Drive-Ins and Dives.” Fieri showed up with his TV crew and entertained staff and customers with his usual comedic flair, helping to put Agave on the Ashland culinary map.
The restaurant first opened in 2006, as Andrew Chester saw the need for a small-plate Mexican-style restaurant in downtown Ashland. The were soon joined by Kathryn Golden Maloof.

“My partner John Hinkle was a chef, and he designed the menu, with a few additions from me, including Squash and Portobello Mushroom Tamal and flan,” Kathryn said. “John’s first employment foray in Ashland was as head chef at the newly opened Black Sheep. He was honored as Southern Oregon Chef of the Year once upon a time.”

The original rest-aurant was in a small space at 92 N. Main, where Flip is located now. In December 2014 they moved to a much large location at 5 Granite Street, which also has an outdoor seating area.

The décor at Agave is fun and lively, and Kathryn is responsible for much of that.

“I am an artist, primarily a photographer and painter,” she said. “The art on the walls at Agave is mine. I’ve also been very passionate about food and cooking, and since we moved to the larger location, we’ve added several new dishes to the menu. I am stepping down from daily involvement at Agave to more fully pursue my artistic interests. I hope to change the displays at Agave as a result of my studio focus.”

Her partner John, unfortunately, passed away a few years ago, and while he was ill, Jacob Brown-Van Ausdall joined Agave as part owner/operator.

“Many of our crew have been with us for years, and a couple since we opened in 2006,” Kathryn said. “Tony, our head cook and kitchen manager, has been with us since the day we opened. For me, it is a joy to work here. Whenever I leave for an extended time, I miss our Agave family. And when I eat my way around Southern California and Baja, Mexico, I can hardly wait to get back to Agave for the best, freshest Mexican food.”

In addition to some dazzling margaritas, the menu at Agave includes some delicious tacos and tamales, plus guacamole with chips and salsa, ensaladas, a vegetarian pozole (roasted pork can be added to it), a Torta, and an Agave Bowl (either pollo, carnitas, verduras or carne).