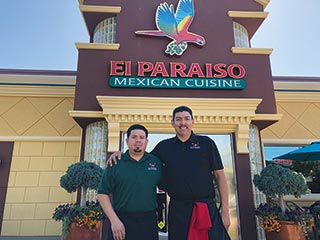 Apparently, the 8th anniversary party for El Paraiso Mexican Cuisine (545 Clover Lane) back in April was quite the affair. In addition to live music, free appetizers and desserts, there were also wine and tequila tastings, plus plenty of food specials.

While we weren’t able to make that shindig, we sat down with owner Jesus “Jesse” Nuñez last week to get his take on the last eight years.

“It has been fantastic,” Jesse said. “We have developed a very loyal customer base, and our mission has always been high quality food with consistency. We also completely remodeled the outside of the building and have done some improvements inside, including a separate room for private parties.”

For Jesse, the road to being the owner of a successful restaurant has been a long and rewarding one. He was born in Michoacan, Mexico, and moved to Fresno, California, with his family when he was young.

“When my older brother married a woman from Medford, I moved to the Rogue Valley in 1994,” he said. “I started at Antonio’s as a dishwasher and moved my way up. I’d been cooking for ten years, but my dream was always to have my own restaurant.”

When Jesse heard that the old Miguel’s had closed down in 2010, he knew it would be perfect for what he wanted to do.

“The first time I walked into this place I could see its potential,” he said. “It’s a great atmosphere for a Mexican restaurant, including a fantastic bar with four big-screen TVs for sports viewing. In fact, we sponsor a lot of local sports teams and encourage them to come in after games or practice.”

Being around restaurants and food most of his life, Jesse has put a tremendous amount of time and effort into developing the menu.

“My plan was to concentrate on the food and great service,” he said. “We serve authentic Mexican cuisine using totally fresh ingredients. Nothing comes out of a can. Our beans and rice are made fresh every day, and we offer two kinds of chips for the salsa.”

Popular menu items are the fajitas, the chile rellenos (made with fresh poblano/pasilla peppers), the seafood chimichanga, and the espresso burrito.
Jesse and his staff want to make everyone feel at home. There’s a Margarita Monday, a Taco Tuesday, and Happy Hour every day from 3-5pm. The bar section is spacious, and for the warm summer weather, the outdoor patio seats 15.

“I want to thank all of our loyal customers for their support over the last eight years,” Jesse said. “We love Ashland; it’s a great town.”