GREENLEAF’S “SECOND EDITION” ON THE PLAZA 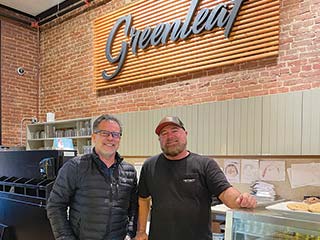 It’s not easy taking over an iconic Ashland restaurant that had been serving downtown Ashland for over 35 years, but that didn’t deter Brent Brakebill, Frank Ortega and Mari Mendoza when they bought Greenleaf Restaurant (49 N. Main on the Plaza) from Daniel Greenblatt in February 2020. That, of course, was just one month before the pandemic shut everything down, so the timing wasn’t exactly perfect. It’s a testament to the trio’s work ethic that they were able to make it through the crisis and transform Greenleaf into their own image.

“I’ve been a restaurateur for 35 years, and in 2019 I saw an opportunity to rebrand and remodel one of Ashland’s iconic establishments—and be part of this close-knit community,” Brent said. “Once I met the owner, Daniel Greenblatt, I was instantly drawn to his energy, expertise in the industry, and altruism. Working with him during the business transaction and ownership transition quickly became a privilege.”

Brent and Marisela have lived in Ashland for three years, wanting to raise their two girls in the beauty of the Pacific Northwest while attending the Siskiyou (Waldorf) School).

“This has allowed us to slow down and be closer to nature,” said Marisela, who is an adjunct instructor at Rogue Community College. “We are from Long Beach, where we had owned five different restaurants and, in fact, we still own one restaurant: EJ’s Pub in Long Beach. With Greenleaf, I saw an opportunity to give it a new design and decor theme with a concept that pays homage to the literary arts.”

Marisela is happy with the restaurant’s new look.

“Many times throughout the day, we see passersby stop, cup their hands to the front window to get a better peek, and then enter intrigued by the traditional modern redesign of the space,” she said. “We have realized that many locals do not know Greenleaf has turned a new leaf (pun intended), and rebranded, and many locals are rediscovering us. We not only gave the place a complete face-life, but we also consulted with a chef. And for the history buffs out there, you can find some historic Ashland photography in-house.”

The third team member, Frank Ortega, spent over 35 years in management and logistics in operations for a large corporation. He “retired” and moved him and his family to Ashland in 2016 with the intent of slowing down the pace of their lives.

“I reached the much sought-after position of retirement and found myself asking, now what?” he said. “With a young son still to raise and a wife with a busy career, I pondered the possibilities of my next venture in life. Around this time, I met a dear friend and neighbor with extensive restaurant experience who expressed a desire to pursue local restaurant ownership. I figured with our backgrounds, we would make a strong team.”

And so the “new” Greenleaf was born.

“We have kept some of the classics from the original menu and also added some new classics to keep things fresh,” Brent said. “The menu boasts vegetarian, gluten free, and meat options so there is something for every palate and dietary need one could have. Most everything is made from scratch, so you can expect to get a fresh home cooked meal in an upscale environment.”

For more info, the phone number is 541-482-2808. You can also see them at greenleafrestaurant.com and on Facebook and Instagram.