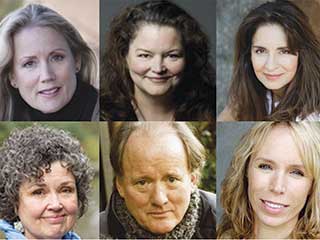 In a time when regional theaters with large budgets cannot yet safely and profitably reopen, Rogue Theater Company in Ashland has found a way to not only operate, but thrive. In its third year, Rogue Theater Company’s 2021 season features a host of Oregon Shakespeare Festival actors and directors, including (pic above, starting from top left, clockwise: Robin Goodrin Nordli, KT Vogt, Vilma Silva, Caroline Shaffer, Michael J. Hume, and Penny Metropulos.)

“Early into the pandemic we discovered that theater lovers felt safe at outdoor, socially-distanced spaces”, says Jessica Sage, Rogue Theater Company’s Artistic Director. “Last year we presented a series of play readings at Grizzly Peak Winery, and audiences were grateful to get out of the house and enjoy live, outdoor performances. All our shows this year will be 2pm matinees, again outdoors at Grizzly Peak. With the Oregon Shakespeare Festival shuttered until September at the earliest, we are able to recruit OSF actors and directors. It＊s a win-win, because these artists are attracted to the plays we＊ve cWhosen, and we benefit from world-class talent in our productions.”

From May 6-16, Robin Goodrin Nordli and KT Vogt will appear in Lucas Hnath’s A Doll’s House, Part 2, directed by Caroline Shaffer. In 26 seasons at OSF, Nordli has appeared in 58 productions in 76 roles. Vogt is a comedic favorite in her 13 seasons at OSF. Peter Alzado and Hazel James will join them onstage.

A 26-year veteran at OSF, Michael J. Hume will direct Tiny Beautiful Things July 14-25, based on the book by Cheryl Strayed, adapted for the stage by Nia Vardalos, and featuring Renée Hewitt, Alex Boyles, Mia Gaskin, and Rigo Jimenez.

From October -17, 25 y-ear OSF company member Vilma Silva will star in Melinda Lopez’s Mala, directed by Penny Metropulos, who in 20 seasons at OSF directed nearly two dozen plays.
Additionally, Barry Kraft will lead a series of six Shakespeare sessions from September 7-23, who in 31 seasons at OSF acted, dramaturged, and lectured.

“We’ve been working diligently with Actors’ Equity on strict Covid protocols to make sure everyone is as safe as possible,” Sage said. “It’s a lot of time and effort, but it’s necessary. After a performance, a woman approached me with tears in her eyes, thanking me profusely for bringing live theater back to the community. She said it was the first time she’d been out of the house since last March. So, yeah, it’s definitely worth it.”

Tickets are now on sale for A Doll’s House, Part 2, running Thursdays thru Saturdays May 6-16 at 2pm, outdoors and socially distanced at Grizzly Peak Winery.

Tickets start at $25. The May 7 Opening Benefit for “Resolve Center for Dispute Resolution and Restorative Justice,” with wine and actors’ talkback, is $35. May 6 preview performance is $20. Tickets are available online at roguetheatercompany.com, or call 541-205-9190.