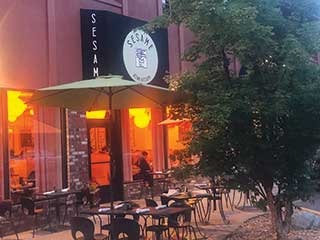 For over two decades, Tom and Lisa Beam have been an integral part of the Ashland restaurant scene. Lisa had graduated from Willamette University in 1996 and Tom from the Culinary Institute of America in Hyde Park, New York. They actually met in the late 1990s while working in Winter Park, Colorado, where Tom was a baker and Lisa a Special Events Coordinator for the ski resort. They were married in 2000 and after moving to Ashland, worked at various restaurant-related businesses before opening Pasta Piatti (now Pie + Vine) in 2004.

Their next venture was Sesame (21 Winburn Way), which celebrated its tenth anniversary last year.
“Years ago, every time we would leave Lithia Park with our daughter Olivia, we would gaze at Lithia Stationers and wonder why it wasn’t a space for the public to enjoy great food and the view,” Tom said. “When the space was vacated in 2007, we inquired about the lease. At the time, the building owners were looking for another retailer to take over the space.”

The Beams then moved on and started pursuing other options.

“As chance would have it, we had lunch with Bruce Roberts (one of the building owners at the time), and pitched our idea again,” Lisa said. “It was a go! In December 2008 we began the construction and design process.”

The Sesame concept was created with the same focus as Pie + Vine: everyday family dining in downtown Ashland.

“Sesame’s menu is inspired by the various cultures,” Tom said. “Overall, our dishes are a representation of a fusion of cuisines from the South China Sea. We incorporate fresh Asian vegetables, natural meats, and house-blended spices with imported specialty ingredients to create our dishes. Seasonal menus and local partnerships allow us to feature the best ingredients. We are also able to pair the menu with beer, wine, sake and specialty cocktails.”

The restaurant itself was designed to enhance the view of Lithia Park and the Ashland watershed.
“We wanted our guests to focus on what is outside, which is the reason for the minimalist design,” Lisa said. “The dining room is a great space for larger groups and families to come together as well as to relax. During the summer, we also offer Creekside seating on Guanajuato Way.”

The Beams are both involved with community organizations, including the Conservation Commission, the Chamber of Commerce, the Ashland Food-Coop and the Mt. Ashland Ski Area. Many days you’ll also find them on the slopes at Mt. Ashland along with their daughter, who is a Junior Patroller on the Ski Patrol.

For more info, the phone number at Sesame is 541-482-0119 or go to sesameasiankitchen.com. You can also see them on Instagram.