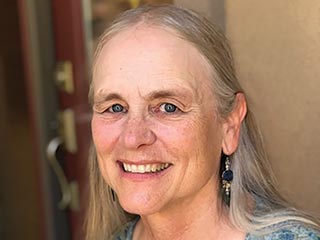 Acupuncturist Jody Herriott (with her practice located at 180 Clear Creek Drive) is celebrating twenty years in business in Ashland this month. She moved here in 2000 after graduating from Southwest Acupuncture School in Santa Fe, NM.

“Previously my husband and I had lived in Burns, Oregon, for 15 years, raising our boys there, but we wanted to be somewhere less remote,” Jody said. “We had visited friends here in the 80’s and liked it. In my last year of school, we drove from Portland to Ashland to see what we’d prefer and chose Ashland.”

Jody grew up on the East Coast, broken up with two stints living in Afghanistan where her father was part of a USAID program, helping set up and teaching at Kabul University. She moved west to attend The Evergreen State College in Olympia, Washington. She started off as a fiber artist (spinner, weaver, dyer) but she had wanted another career.

“I had dabbled in energy healing, and my best friend was a massage therapist and herbalist,” she said. “My husband and I studied Qigong and went through the first Qigong teacher training program at Oregon College of Oriental Medicine in Portland and were teaching that. We went on a Qigong tour to China and many of the others in the tour were acupuncturists. I just felt that was the right direction to go.”

While Jody’s acupuncture practice is general, a large percentage of her patients come for allergies.
“I am trained in Nambrudipad’s Allergy Elimination Technique, which I actually learned in 1997,” she said. “I also work with more traditional acupuncture for many conditions, such as pain, digestive or sleep issues and much more. I can also offer Chinese herbs.”

According to Jody, her needle technique is generally quite gentle. “I like to provide a safe, nurturing environment for my patients,” she said. “If you’re coming for allergy work, I use muscle testing and testing vials to identify sensitivities. Children and needle-phobic adults can be treated without needles, using acupressure or laser. Of course, with the current COVID-19 situation, masks must be worn, and all efforts are made in the office to keep the surroundings as clean as possible.”

The treatment tables at Jody’s clinic include vibroacoustic mats, which can play music through your body.

“It is very relaxing and has been found to actually stimulate bone density, just like weight-bearing exercise,” she said. “I also practice an energy healing technique called The Wonder Method which my husband and I developed (see thewondermethod.com). I will occasionally add a few moments of this non-invasive energy work when appropriate, especially when my patient has back or neck pain.”