No issue in Ashland gets people more excited or generates more rumors than the City’s handling of the annual Halloween party. Contrary to popular opinion, neither the City nor the Chamber of Commerce has ever officially sponsored or promoted the Halloween event. They have never placed ads in newspapers in San Francisco or Portland, nor have they encouraged the growth of the party.
According to Police Chief Lively, the City has merely tried to organize the event and channel it into a certain direction in order to better control it. 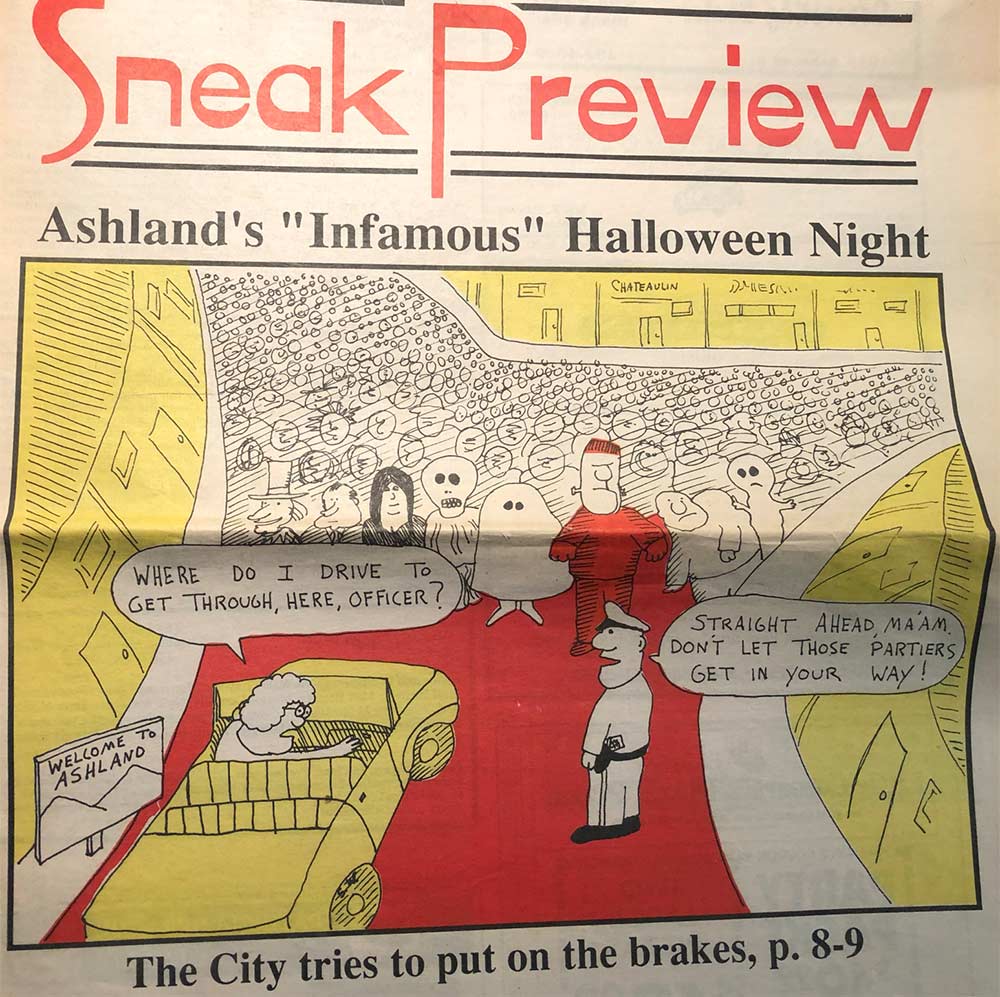 “Usually you can control something better by planning it,” Lively said. “I have seen that party grow from a bunch of kids soaping windows in the 60s to what it is today. In the 80s more and more adults started coming downtown in costume, and it really was a lot of fun. We saw some really creative costumes, and it was mostly Ashland folks. The whole thing was over with at about 10:00 or 11:00.”

The police saw some near misses with traffic, and public safety became a real concern. In 1983 the City Council decided to control the downtown party by closing off East Main Street.
Susan Reid, City Councilor who was on the Council in 1983, remembers the events leading up to that decision.

“The first time I really remember a big party downtown was in 1978,” Reid said. “There was a big fundraiser for Jim Sims when he ran for City Council, and that was the first year I remember groups of adults gathering downtown in costumes. It grew from there to people parading on both sides of the street. Then in 1982 a guy dressed up in a Spiderman costume got on top of a Greyhound bus that was driving through town, and we became real concerned about safety.”

By 1989 the party had grown from a few thousand local people in costume to over 10,000 partiers, many of them from out of town and/or state, and most of them not in costume. To make matters worse, most of them were drunk, looking for fights, and not wanting to go home at 10:00 or 11:00.
Michael Donovan, former City Councilor and co-owner of Chateaulin, a downtown restaurant on Main Street, said he’s seen the trouble brewing for a long time.

“I used to stand out in front of my restaurant for years watching the party,” Donovan said. “It was always fun to see people you knew in costume, but lately there’s been fewer and fewer people I recognize. After 11:00, there were no costumes and I didn’t recognize anybody. The atmosphere is far from frivolity and fun. It’s almost like, ‘Who are these people? The potential for losing control is great, especially after 11:00.”

According to Alex Reid (no relation to Susan), owner of Alex’s Restaurant on the Plaza, the party started getting out of hand in 1986.

“The City had a flatbed truck out on the Plaza with a rock band, and it was a weekend night,” Reid said. “That was the year a guy dressed up in a cowboy outfit accidentally shot himself in the foot, and I think somebody got stabbed. Since then the party has attracted more and more of the wrong element—people who just want to get drunk and rowdy.”

Lively admits that the rock band in 1986 was a bad idea. “That was a really bad year,” he said. “We even put our officers in costume to let them have a good time, but there was a stabbing and a shooting, and it took us till 4:00 in the morning before we finally got it shut down.”

In 1989 the problem reached crisis proportions, as 10,000 people crowded the downtown area. When the barricades were lifted at 11:00, and the street sweepers attempted to come through, the rowdies struck back. Bottles and rocks were thrown at police cars, the window of the street sweeper was busted out, porta-potties—with people in them—were overturned, and sporadic fighting broke out in the streets. Although the police contained it, and it wasn’t officially deemed “A Riot,” it was enough to force Vic Lively to seek advice.

In November 1989, Lively met with the Superintendent of State Police in Salem, who had files on the history of riots in the state. After looking through the data and examining the conditions leading up to a riot, Lively and the superintendent agreed that the Ashland Halloween party “was on the edge.”

Lively also polled his officers, and they were unanimous in wanting to put an end to the rowdy atmosphere. He got the same response from the Jackson County Police Department, the Medford Police, and the State Police, all of whom had to be called in to help with security each Halloween.
Later that month, Lively went to the City Council’s Budget Committee and laid it on the line. If they planned on blocking off Main Street at Halloween, his department wanted to be outfitted with special riot batons and shields. According to Michael Donovan, who was a member of the committee at that time, preparing for a riot was not the direction he wanted to take.

“When I heard that they wanted riot batons, I said to myself, ‘Wait a minute; maybe we’re taking the wrong direction,” he said. “Instead, I felt like we needed to discourage such large crowds from coming to Ashland for Halloween.”

Mayor Cathy Golden agrees. After Lively’s request for riot gear, she helped form a special Halloween Committee to study the problem. The committee included members of the City Council, City police, the college, schools, and the Downtown Association.

“When Vic Lively made the request for the riot gear, he knew the police were going to have to be ready,” Golden said. “Our job was to say, ‘If you know it’s coming, maybe we should try and stop it.’ That was the job of the committee.”

And what the committee came up with was a recommendation that the City Council not block off Main Street for this year’s Halloween. In August the Council voted to accept the recommendation.
“I think everyone agrees that five years ago Halloween was fun,” Susan Reid said. “It just shifted from a local celebration to a crowd control problem.”

Michael Donovan agrees. “Halloween has always been a spontaneous party in Ashland,” he said. “It was one of the few opportunities for local people to enjoy the community. It has slipped away from that and now has the reputation of a big block party of outsiders.”
According to Mayor Golden, there’s another important consideration—the financial value of the downtown area of the city of Ashland.

“The downtown area is the most important section of any town or community,” she said. “There is the potential for an incredible expense to our merchants if things get out of control. If a riot broke out downtown the police would not be able to get between the buildings and the people, and the damage can be quick and irreversible. The riot in Chico during the Pioneer Days was confined to a residential area, and compared to what the damage could have been downtown, it was minimal.”
Meanwhile, rumors are still flying that the City has shut down Halloween. Alex Reid, who has sponsored a private party at Alex’s for the last two years on Halloween, thinks the City went a little overboard in their response to the problem.

“I think they’re panicking,” he said. “I’d like to see it toned down and just become an Ashland thing, but the street should still be blocked off. They shouldn’t promote it, and they should do a couple of news stories warning people that if they get rowdy, they’re going to be arrested. Ten percent of the people always ruin it for the 90% who want to have a good time.”

Mayor Golden and the City Council are determined to return Halloween to the locals, and opening the street up is a first step.

“Originally, Halloween was a party for the locals to ‘take back Ashland’ after the end of the Shakespeare Festival,” she said. “What we’re going to do this year is close the street for the Children’s Parade from 4 to 5:30, and hopefully the adults will use that as a time to dress up and celebrate. Halloween should be an Ashland event and not something for the entire region. We think this is a positive step and a return of the celebration to the locals.”