Ashland icon E.G. “Beasy” McMillan, also known as the Godfather of Ashland Restaurants, passed away on March 18, 2021, with his loving wife of 51 years, Carole, and his son Ryan by his side.

Beasy was born in Houston, Texas, on May 2, 1950, the son of Glenn and Barbara McMillan. After graduating from Westchester High School in 1968, he moved to Austin and attended the University of Texas, where he met his wife to be Carole, who was from Midland, Texas. They got married on November 21, 1970, in Houston, where they both worked as waiters at the Railhead Restaurant, a steakhouse managed by Paul Helm, who would become a life-long friend. 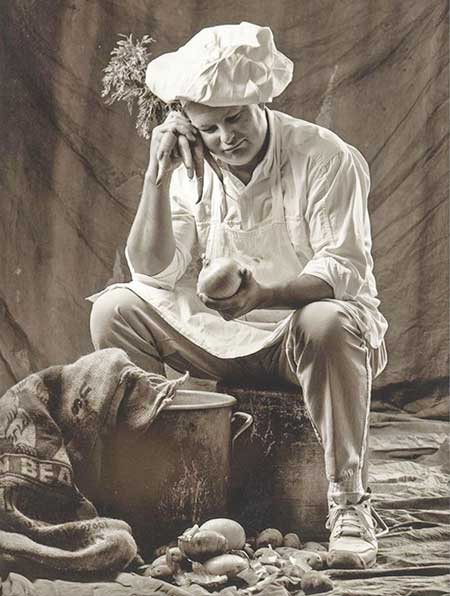 Beasy loved to cook, and at an early age was cooking meals for his family. In 1975 he and Carole moved to Crested Butte, a mountain town in Colorado that they had visited a couple of times, intent on becoming ski bums. It was there that he first turned his love for food into an avocation. His first restaurant, Beasy’s Gazebo, opened that year and his chef, Jeff Keys, was an Oregonian whose family lived in Southern Oregon.

Intrigued with the idea of moving to Oregon, Beasy and Carole visited Ashland a couple of times in the early to late 1970s and loved it. After relocating back to Houston for a year, they finally made the move to Ashland in 1981, and he, Jeff Keys, and Candy Durham opened a restaurant, Change of Heart, in a second floor space above Paddington Station. Soon afterward, he opened another restaurant in the back room dubbed Beasy’s Back Room, with its grilled steaks and signature house salads.

Beasy was an entirely self-taught chef and his house was littered with almost 700 cookbooks. The normal person would read a good novel in bed before going to sleep. Not Beasy. He had a cookbook by his side. He rarely worked the kitchen; rather, his joy was in designing menus and creating an ambience in every restaurant that would get people coming back.

In his 40 years in Ashland, he was responsible for 13 restaurants, plus two in Medford, and another venture in Ketchum, Idaho. He also helped many local restaurant owners get their start. Marty Morlan of Macaroni’s/Martino’s was flipping steaks at the Back Room, when Beasy broached the idea of starting an Italian restaurant in downtown Ashland.

“Beasy was a great mentor for me for over 30 years,” Morlan said. “At a crossroad in my life, he changed it profoundly by giving me an opportunity to own my own business, and by guiding and influencing me through the industry. He not only employed so many but touched the lives in this community and beyond. His heart and spirit will always be felt here at Macaroni’s and Martino’s.”

Rob Harvey of Beasy’s on the Creek and Harvey’s started as a 16-year-old dishwasher. Billy Harto of Thai Pepper and Billy’s Fried Chicken started as a line cook for Beasy, when he was talked into getting Thai Pepper off the ground.

He opened Senor Gator’s in 1970 with the help of B.T. Collins along the banks of Ashland Creek in Bluebird Park, and that eventually segued into Back Porch BBQ (Beasy missed his Texas BBQ too much). B.T. would eventually move that restaurant to Jacksonville.

There was also the Big Kahuna in Lithia Park, and the Kat Wok, which he opened with the help of Pat South. Pat would move on and open Tabu in 2001 before relocating to Portland.

Beasy was also instrumental in getting the Hong Kong Bar off and running on the third floor above Gold & Gems, and Beasy’s Hacienda underneath that on Guanajuato Way. And of course, there was Tutto Bene and Wailea Ranch in Medford.

The love of his restaurant life, though, was Cucina Biazzi, which he opened in 1990. A few years later, he suffered a heart attack and on advice of doctors, divested himself of all his restaurants and concentrated all his efforts on Cucina. He loved it so much that he took his whole staff and his son Ryan to Italy for a tour of Tuscany, learning as much as they could about Italian cooking and how a real Italian restaurant is run. The staff included his chef Chandra Corwin and his number one waitperson, Rebekah Davis, both of whom are still at Cucina Biazzi.

Chandra remembers Beasy fondly: “When he wanted to tell you something, with his cigar in his mouth, he’d say, ‘Now here’s the deal, guys.’ He’d take us on road trips in his van, blasting music and swinging his arms dancing in the driver’s seat. A song would come on, and he’d turn it down and say, “$5 to whomever can guess this song.’ Then we would proceed to eat way too much food at all his favorite restaurants. He could be very generous. One Christmas he told me I was a part of a cookbook club, and he individually wrapped and wrote in 30 cookbooks.”

Working with Beasy in a restaurant was an adventure. “Once you worked for Beasy at Cucina, you became part of the family,” Chandra said. “He would drive up in his car and deliver us food that he cooked. He loved making comfort foods, and he made the best BBQ. He’s the only one who could get us to eat soup when it was 90 degrees out. He could talk about food for hours. I usually had to cut him off and say I got to get back to work.”

Chandra continued: “I miss him. I miss talking to him. I miss being annoyed at my boss because I disagreed with what he was saying. Rolling my eyes knowing he couldn’t see me. I miss him calling the restaurant at 7:00 when we were slammed asking if we were busy. I worked off and on for him since 2000. He was my mentor, my friend, my foodie buddy. I loved him like family.”

Beasy is survived by his wife Carole and son Ryan; nephews Tim and Michael McMillan of Austin, Texas; nephew Joey McMillan of Bend, Oregon; niece Melissa McMillan of Portland; nephew Lee and his wife Jill McMillan of Seattle; sister Susan Ramey and her husband O.D. of Corpus Christi, Texas, and many more nieces and nephews. He was preceded in death by his mother, father and three brothers (Dan, Tim, and Mickey).

Beasy’s family would like to thank Ashland Fire & Rescue, Ashland Community Hospital, Rogue Valley Medical Center, and Bristol Hospice for all the work they did during these trying times.
A celebration of life will be announced soon.