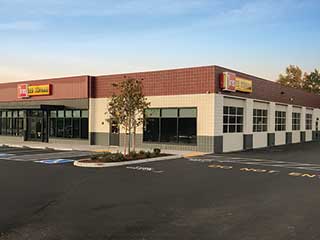 If you happened to be one of the hundreds of people who showed up for the “Neighborhood Celebration” at Les Schwab Tire Center (1694 NW 6th) on November 15-16, you got a chance to view the newly remodeled store and take place in all the festivities.

Manager Matt Thurman and his staff were there to show off all the new equipment and a remodeled waiting room, plus present a number of giveaways, including a chance to win Les Schwab swag and free services for your vehicle.

“It was a fun time,” Matt said. “We are all about customer service here at Les Schwab, and we wanted to show our customers how much we appreciated them.”

The remodeled waiting room makes waiting for those new tires worth it, with free coffee and popcorn, plus free Wifi and plenty of reading materials.

“At Les Schwab, we not only sell high quality, name-brand tires, but with any of our tires, we also do free tire repair and tire rotations, tire re-balancing, alignments, seasonal changeovers, and free brake checks,” Matt said. “To us, doing the right thing matters.”

The history of the founder, Les Schwab, is legendary. Born in Bend in 1917, his family relocated to Minnesota when he was two, then later moved back to Central Oregon in 1929, where Schwab was schooled in a railroad boxcar at a logging camp, with his mother as the schoolteacher.

After his parents both died in 1933 when he was 15, an aunt and uncle offered to take him in, but Schwab instead rented a home in a boarding house for $15 a month. He supported himself by delivering papers for the Oregon Journal. After high school he married his high school sweetheart in 1936 and served as circulation manager for the Bend Bulletin in 1942, then served in the Army Air Corps during World War II.

Seeing an opportunity to venture into the tire business, he bought an OK Rubber Welders franchise store in Prinville in 1954, when he was 34 years old. He’d “never even fixed a flat tire” in his life, but he invested everything he owned, including his life insurance policy, and put his heart and soul into the business.

The rest, of course, is now history. As of 2014, there were officially 374 Les Schwab Tire Centers across the western United States, and Modern Tire Dealer called it “arguably the most respected independent tire store chain in the United States.” According to Wikipedia, “The company was based on the loyalty of the employees that was earned by giving them generous shares of the profits, lucrative benefits, and only promoting from within the company.”

For more info, the phone number is 541-479-2671. The store is open Monday-Saturday and closed on Sundays. You can also see them at lesschwab.com and on Facebook.