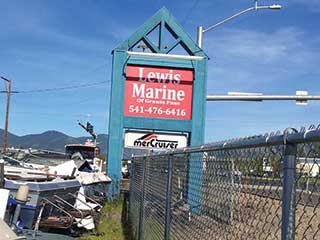 Back when I started the Sneak Preview in 1986, Jeff Lewis, owner of Lewis Marine of Grants Pass, had just broken the World Outboard Speed Record on an F-Class Hydroplane boat that he designed and built along with his racing partner Sonny Jackson. Lewis, of course, would go on to win ten Boatnik races, which isn’t surprising for a man who has literally spent his entire life around boats.

“My parents were avid water ski enthusiasts and when they would pull in for fuel at Ferndale Resort on Clear Lake, California, I would often disappear, only to be found in the repair shop ‘helping’ the repairman at the age of four,” Jeff said. “This later became a summer job at the age of 12, and off hours would find me building a boat in the wood shop.”

In 1964 Lewis moved to Crescent City and was introduced to boat racing in 1965. His neighbor across the street was Harvey DeMartin, vice-president of Bank of America and D-alky runabout champion.

“Some friends encouraged me to set up a boat repair shop in Grants Pass, and in 1976 I was introduced to Don Jackson, who had a rental on Highway 99, where I opened shop with the help of Milo Zenovich of Milo’s Sporting Goods,” Jeff said. “It’s been quite a journey all these years and I’m met a lot of interesting people.”

In 1985, one of his customers, Ora Condray, insisted he needed a larger shop. “So I drew up a set of plans, and Ora built the shop on his Hillcrest Avenue property, where I operated for 29 years. The property sold in 2014 and I moved to a shop across from Farmers Building Supply on Redwood Highway. When they upped the rent to $5,000 a month, I decided to leave and luckily found the perfect spot in Merlin at 1300 Ort Lane.”

Ort Lane is a mere three miles off the I-5 exit, then another short jaunt to Lewis Marine. At the shop, Jeff caters to the service and repair of family boats, with a complete line of boating accessories. After a lifetime of fixing boats, Jeff definitely knows what he’s doing.

“If your boat’s engine isn’t running right, bring it to us so that we can diagnose the problem and offer experienced repairs or services,” he said. “Regular maintenance is also important, and you should have the motor checked yearly for superior performance. For example, right now is a good time to have your engine winterized.”

“I’m still a one-man operation and do a lot of vintage boat service,” Jeff said. “Boating is still one of the best family-unit activities for all to enjoy.”