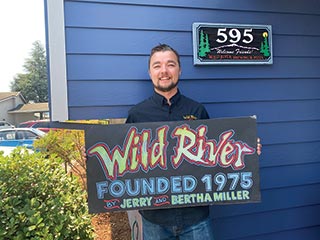 Wild River Brewing and Pizza is one of the major success stories in Southern Oregon. What began as a pizza/brew pub in Cave Junction by Jerry and Bertha Miller in 1975 has now expanded to six locations, with three of them in Grants Pass—The Publick House at 533 NE F; Wild River Brewing & Pizza at 595 NE E; and the Wild River Brewing Plant on I Street.

“Jerry and I moved to the Rogue Valley in the 1970s from Hayward, California,” Bertha said. “Jerry worked for Taylor’s Sausage helping Chuck Taylor get his plant running. We then opened a sandwich shop/deli selling Taylor’s, which became very popular. The first Wild River was opened in 1975, and it was originally called the Pizza Deli. Before long, we had restaurants in Brookings, Grants Pass, and Medford.”

Jerry Miller passed away in 2016 with Bertha overseeing operations until recently passing the torch to grandson Clay Leedy.

“Focusing on the handing of the torch to the next generation in the Miller family to Clay shows the long term future and excitement of Wild River,” Bertha said. “The reinvention of the Pub, the investment and expansion into the brewing/bottling/canning facility, and the remodeling of the Main is working to reinforce Wild River’s commitment to becoming a ‘destination-chain.’ Our restaurants showcase the Three Rivers area. Besides being the familiar neighborhood/family spot to share with those who currently live locally, these are locations that you can recommend to tourists, and where you bring folks from out-of-town to visit.”

Clay, born in 1994 and raised in the Portland area, came to Southern Oregon in 2017 after graduating from Santa Clara University with a degree in accounting and receiving his CPA license.

“I worked for a summer at the Grants Pass E Street location and fell in love with the people and culture,” Clay said. “As has been done for decades before me, I am committed to carrying on my grandparents’ work. I want to continue the entrepreneurial legacy that my grandfather Jerry set forth and to show his love of the Rogue Valley, amazing beer, good food and family. Moving forward, we would love to expand into distribution so that we can share Wild River with other communities.”

Clay is getting married to a Southern Oregon native named Josie, whom he met at Wild River. They are planning on continuing their family here in the Rogue Valley.

At Wild River, you will find hand-crafted breads, dough, desserts, pizza, and pasta made in house with many locally sourced farm-fresh ingredients, from Fort Vannoy Farms and Taylor’s Sausage to brewing ingredients (which are hand-picked and locally sourced). Brewer Scott Butts has been brewing at Wild River for nearly 25 years.

“We have been brewing since 1990 (in Cave Junction) and are one of the original breweries in Oregon,” Scott said. “We’re proud members of the Independent Craft Brewers of America, and we have canning come soon at our I Street location. Growlers and kegs for our beer will soon be available. We also make our own soda—root beer and orange cream soda—which is already available in growlers and kegs.”

The Wild River Pub also has a large Publick House area that is designed for receptions, meetings, conferences, and any function where a large group of people can gather and enjoy a great meal. The Pub has a full schedule of events and is looking forward to bringing back Comedy Night in a post-Covid world.