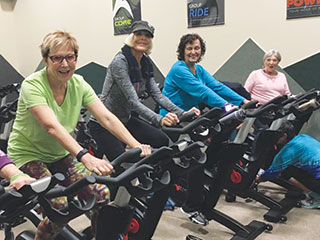 The party lasted well into the night at Club Northwest (2160 NW Vine) as they welcomed their new Marketing Director Erika Bishop, who has lived in the Rogue Valley since 2002, leaving New York City after the 9/11 attacks.

“My young family was living 12 miles outside New York, and my husband and I both worked in the city,” Erika said. “Nothing was the same after that day and we decided it was time to go. We stumbled across southern Oregon and decided it was a great place to raise children. We purchased a home and within a matter of months headed west.”

Erika grew up in Spokane, Washington, and her family has roots in Montana. The family then moved to Michigan and New York City, following the tragic death of her father. She attended college at the University of Montana, receiving a degree in Broadcast Journalism, then returned to New York to begin a long career as a network television producer.

“Most notably I was a pioneer for The Food Network, where I worked as an Executive Producer for seven years,” she said. “We created thousands of hours of food television programs and launched many famous chef brands.”

For Erika, working at Club Northwest is the greatest job in the world. “I literally feel as if I’m in a candy shop and feel so fortunate to be working with this team,” she said. “I have freelanced as a marketing professional around the valley for many years, and it wasn’t until I started working with this organization that I truly felt like I was home.”

The Club definitely has some credentials. The multi-purpose wellness retreat was voted a Top 100 Health Club in the nation. The CNW campus offers “an amazing facility with the latest equipment, a full aquatics center, racquetball courts, outdoor tennis and pickleball courts, along with a new Ropes Challenge Course.”

“The Club has some of the best personal trainers and instructors in the industry,” Erika said. “We teach over 100 Group Fit classes a week (like Zumba and Yoga). In addition, The Club has several spaces and storefronts like The KidZone, the new well (diet and nutrition center), and The Spa, which is an award-winning medi-spa experience like no other.”

Erika had set her sights on working with Club Northwest in 2017 when they placed in the Top 100 Places to Work in Oregon.

“I wanted to know why, and the answer is very simple,” she said. “It’s the people. This is a place where personal wellness (both mind and body) is the key motivator to success and happiness for members as well as staff. It starts right at the top and you can feel it. The brilliance of the business model is that every effort is put into staff training and wellness, and that reflects right back on our members.”

Erika’s goal at Club Northwest is to set up the department with progress in mind. “I’m working on the systems and process that will carry this company well into the future as we consider an incredible array of growth opportunities,” she said. “Soon you may see a new CNW opening in Medford or Bend … or maybe both. And for sure we will be pioneering some serious wellness efforts in the digital world. Our goal is 100,000 members by 2037.”

For more info, the phone number at CNW is 541-955-CLUB. You can also see them at clubnw.com and on Facebook.