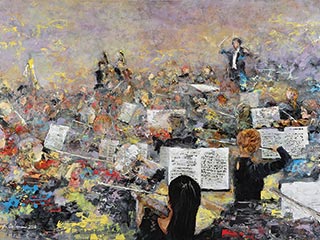 Rogue Valley Symphony has released the program for its 52nd season and tenth year with Music Director Martin Majkut.

“It has been a wonderful journey where every musical investment has met with the affection and appreciation by our truly fantastic audiences,” Majkut said. “The music community of this valley is something that other music directors can only dream of.”

The 2019-2020 season will include a special concert on New Year’s Eve as well as the traditional six Masterworks concerts. Majkut has planned what he says is his best season yet filled with “exceptionally talented female soloists representing a variety of ethnicities and backgrounds.” RVS will also bring two new pieces to life through co-commissions.

The season will open on the weekend of September 27-29 with rising star cellist Sujari Britt and Edward Elgar’s “Cello Concerto” as well as Mily Balakirev’s “Islamey” and Igor Stravinsky’s “Petrushka.”

The second series will run from October 18-20 and features all American works. Renowned violinist Elena Urioste will be featured on Samuel Barber’s violin concerto and a new orchestration of American composer Christopher Rogerson’s “Of Simple Grace.”

The third Masterworks series will occur November 15-17 and will feature Curtis Institute faculty member and horn soloist Jennifer Montone on Richard Strauss’ “Horn Concerto No. 2.” Other works at this concert will include Wagner and Tchaikovsky.

New Year’s Eve will be a glittering celebration of Maestro Martin Majkut’s tenth season. The evening will include a spectacular Viennese style concert featuring the waltzes of Johann Strauss. Francis Poulenc’s “Concerto for Two Pianos and Orchestra” with soloists Joel Fan and Christine Eggert will be the special work. Some patrons will enjoy ringing in the New Year on stage following the concert with Martin Majkut, along with hors d’oeuvres, dancing, and champagne. There are three tickets prices for this festive evening, from the concert only to partying on stage.

Masterworks 4 concerts on January 17-19, 2020, will bring pianist Angela Cheng to the Rogue Valley for Beethoven’s “Piano Concerto No. 5—Emperor.” The concert will also include works by Mozart and Brahms.

February’s Masterworks 5 concerts on February 21-23 will be a celebration of the Chinese New Year with violinist Nancy Zhou as the soloist for He Zhanhao and Chen Gang’s “The Butterfly Lovers Violin Concerto.” Zhou is the winner of the Shanghai Isaac Stern International Violin Competition.

The Masterworks series will finish its sixth set of concerts on April 17-19. The second commission of the season, Drew Hemenger’s Ozymandias for tenor soloist, chorus, and orchestra will be presented and will be the debut of the Rogue Valley Symphony Chorus. Gustav’s Holst’s “The Planets,” including a captivating film by Adrian Wyard, will close the concert and season with a bang.