Shipping Containers: The Wave of the Future 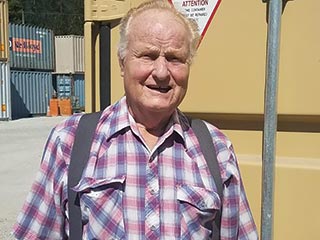 Col. Daniel Vest has been a Rogue Valley businessman for a long time, and in 1996 he decided to invest in what he thought was the next big thing: shipping containers.

“They’re no longer used merely to transport goods,” Dan said. “There has been an impressive creative expansion concerning these sturdy steel structures. This has resulted in the development of numerous shipping container architectural trends. There are many benefits to using shipping containers as the structural shell for your next construction.”

And thus Great Western Storage was born, and it’s been at its location at 2354 NW Vine Street in Grants Pass for the last three years. Dan has contacts throughout the West Coast for purchase of the containers, many of which come straight from the Far East as a one-time shipping.

“In early 2014 new one-trip units started filtering into the West Coast,” Dan said. “These units are made in China, used one time, then sold on the American domestic market. These units are exceptionally nice and are about as good of a unit as you can buy.”

The units can be converted into a variety of uses. After retrofitting for doors and windows, they can be used as schoolrooms, walk-up restaurants, shipping container homes, workshops, tool sheds, disaster shelters, even swimming pools.

According to Dan, one of the most urgent uses is as storage.

“There is much to consider when purchasing a cargo container for custom design or just simple storage,” he said. “You can buy or rent from us and modify to your own needs. Many people use them as storage, and they’re really helpful at large construction jobs.”

The containers can be especially useful for small dwellings, shop cabins, storage sheds, etc. Dan and his crew will do the rough-in work, while the customer finishes the project himself.

“We weld in door and window frames, vents, insulation, and partition nailers,” he said. “We can also place the unit into difficult locations. We were at one location recently with expensive landscaping and were told of the painful torture that the lady of the house would impose on anyone who would cause even the slightest damage to her plants. We could only move the trailer a few feet or inches and literally jacked up and pushed it over to clear some very exotic bushes or flowers. It took three hours but we got ‘er done.”

If you’re in need of a storage unit or want a reasonably priced dwelling to add as a structural unit to your property or business, give Great Western Secure Space Storage a call at 541-479-5750.