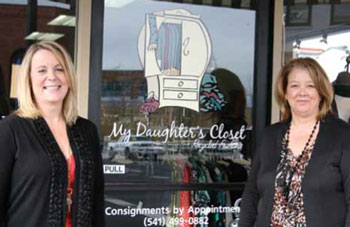 Medford native Tami Abeloe has seen many consignment stores come and go during the past three years since opening her own upper end consignment store— My Daughter’s Closet—in May of 2009. “I think the misconception is that this is an easy business to be in,” Tami explains. “Let me assure you, it takes a lot of work and business sense. Slow and steady wins the race. Our customer service really sets us apart. We love our customers and consignors – we consider them our friends!”
My Daughter’s Closet, located at 237 E. Main Street in downtown Medford, offers brand name clothing, shoes, and accessories at reasonable prices    for women and teens. In December of 2011 they added to their space by taking on a vacancy at the back of the store, which is now home to their junior selections. 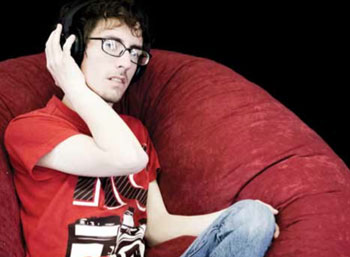 “I’m not selling 99 cent burgers,” Dominic Luciano said as he and his dog, Rocky, relaxed on a large beanbag in his Medford production studio. “And I’m not just some schmuck on Craigslist. I know what I’m doing, and my work reflects that.”
Dominic is a one-man production company. From photography, videography, graphic design to music production, Luciano Incorporated has you covered. “All my life, I’ve done art,” Dominic said. “Music production is my favorite. I’ve always been a musician. It’s who I am; it can’t be taken out of me.”
Shorty after his birth, Dominic was diagnosed with cerebral palsy. As a form of physical therapy, he began playing the piano at age two. In grade school, he was classically trained for over four years; he then joined the jazz band at North Medford High School.