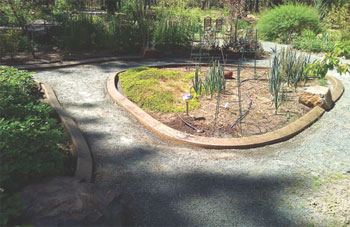 After seven years in telecommunications in Utah, Kevin Kelly was ready to make a career change and become his own boss. And as if out of a movie, his opportunity literally arrived at his doorstep, well, actually one door down.

"To my amazement, I woke up one day to a neighbor having a cement curb installed around his lawn in the snow," Kevin said. "At that point, I decided I had finally found the concept I was looking for: a practical product that anyone can use whether around a lawn as a mowing strip, along a driveway as a finishing touch, or in a pathway to retain rock."

He quickly ran over to the contractor installing this landscape curbing and asked him every detail of the business. "After discovering the potential of this product, I was convinced this was exactly what I was looking for," Kevin said.

Shortly after this incident in 2002, Kevin moved back to Oregon and started Redi-Curb with his father. Redi-Curb is a company that extrudes decorative landscape curbing without the use of forms. "Our specialty extruder can create unlimited designs while simplifying the everyday task of edging your yard, maintaining a barrier between your lawn & flower beds that won't rot, fade or otherwise have to be replaced in short order," Kevin explained. "We also work along driveways, pathways and commercial parking areas."

Redi-Curb is celebrating their 10th anniversary in the Rogue Valley, and to show their appreciation, they are offering some unprecedented savings opportunities—for details check out their coupon ad on page 21 of this issue.

"Our customers can expect a professional installation of a superior product that you'll be able to enjoy day after day," Kevin said. Redi-Curbs are made with a unique combination of materials, giving the product strength and resilience against the elements of nature. "You can have high expectations that this will be the last time you have to install a border around your lawn or garden area, as this product doesn't move, shift, rot and otherwise deteriorate. Once you have Redi-Curb installed, sit back, relax and enjoy your landscaping for years to come."

Redi-Curb carries an Oregon Contractors License, a Contractors Bond, and is also insured for your protection. "With all the issues in the contracting world," Kevin said. "It's a nice incentive to know that you are covered regardless of the issue."

A Taste of Nostalgic Americana Delight at Caramel Corn 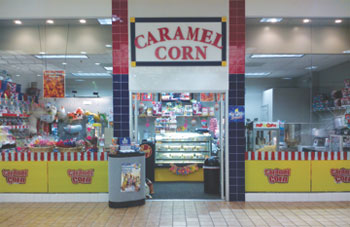 Joanna Erikson worked for the same company for seventeen years, managing three concept stores in the Rogue Valley Mall. Despite all the work she dedicated to that company, Joanna started to feel like she was being taken for granted.

"Year after year the incentives were disappearing, and the economy was drowning out any potential of making a better living," Joanna said. "So I decided one day that enough was enough, it's time to make a change."

And the opportunity came when her significant other—Kevin Kelly—presented the idea of opening a retail store.

To her amazement, the concept they chose was Caramel Corn. It was a natural fit being that her first job nearly 20 years ago was a temporary holiday position at the original Karamel Korn concept in the Rogue Valley Mall, which Joanna eventually ended up managing until the company decided to close it in 2003.

"I couldn't have chosen a better concept to reinvent," Joanna said. "It's been close to a decade that the Rogue Valley has been without a premium caramel corn product that is produced here locally every day in the Rogue Valley Mall."

The couple originally opened Caramel Corn as a holiday kiosk in the mall in 2010. After a brief stent as a holiday tenant, and with the overwhelming support of the community, they brought it back to stay as a permanent fixture in October of 2011 in the lower level Macy's court. "Since opening as a full time confections store last year, we have expanded our selection to include over 22 flavors of candied popcorn that we carry at all times such as Strawberries & Cream, Eggnog, Deluxe Jalapeno Cheddar, New York Premium White Cheddar and several more.

"All our caramel corn is baked fresh daily on location," Joanna said. "We use nothing but top quality products in producing this delectable delight. From our traditional old fashioned electric kettles to our top notch flavor recipes, I believe you will be amazed."

"Indulge yourself with one of our famous refill buckets," Joanna said. "The best part is every 5th refill is on the house! Even if you're not in the popcorn mood, check out our store to bring that nostalgic old Americana feeling back into your life!"

Carmel Corn is located on the lower level in the Rogue Valley Mall. Call 541-973-2127 for more information.