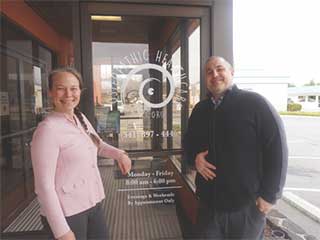 There is a new clinic in Talent called Osteopathic Healthcare. It is based on the principles of Osteopathic Medicine which was founded in the United States in 1874. This unique form of medical care is based on caring for patients, using hands to discover and assist their bodies’ innate healing forces in returning to an optimal state of well-being. This can be done with Osteopathic Manipulative medicine, diet, exercise, life style, medications to name a few of the approaches. Drs Greg Yesensky and Elizabeth Caron founded the clinic as a general practice using a traditional Osteopathic approach. Furthermore, both have been students and teachers for James Jealous, D.O. the founder of Biodynamic Osteopathy who recently passed away.

What is so unique about this clinic is that both physicians have multiple specialties, are board certified, yet have decided to return to basics via general practice, in order to serve the community. Each has taught internationally and have significant clinical experience. It is because of Dr. James Jealous’ influence that both decided to move to the Rogue Valley, where Dr. Jealous had moved because of the good fishing and beautiful nature. Their friendship and his mentorship were the basis for the foundation of the clinic.

Biodynamic Osteopathy is a form of medicine that listens to the indwelling healing forces. There is a constant movement towards normal, in our bodies, nature and beyond. It is this motion toward normal that heals us. It is innate. In daily life we get distracted, yet this motion which is integrally related to stillness and silence, exists in every cell in our body. The founder of Osteopathy, A.T. Still M.D., said that anyone can find disease, it is the job of an Osteopath to find the health. Dr. Jealous took it one step further and said that the Health finds us. Meaning that it already exists, this indwelling healing force called the Health, and that it is just a matter of acknowledging it and its fulminant manifestation can come through.

The hands-on aspect of Osteopathy and specifically Biodynamics is about listening; with our hands, ears, and perception. What is present, if it is our thoracic respiration (breathing), the wind outside, or the grief of losing a loved one; there is motion in each one of these, in addition each cell and organ in our boy has motion. When there is disease inertia sets in, creating a type of stasis. There is momentum towards normal and a constant cycling between creation and death, momentum and inertia. For example, a healthy bone is constantly creating new cells and the old ones die off, even in an older adult. In Biodynamic Osteopathy, attention is paid to these cycles of nature to assist in the healing process.

With the passing of Dr. Jealous, the Osteopathic Healthcare clinic represents part of his legacy. This legacy of patient care in the Biodynamic approach that Dr. Jealous so meticulously and dedicatedly taught for so many years. During these difficult times, it is nice to see the birth of a new clinic which has survived opening during COVID, the Almeda fires and now the death of their beloved teacher.

Elizabeth Caron, D.O. is from Illinois, she trained at the University of New England College of Osteopathy where she graduated with honors. Her residency was in Neuromusculoskeletal/Osteopathic Manipulative Medicine at St. Barnabas/ Weil Cornell Hospital in the Bronx, NY. She is board certified in Neuromusculoskeletal Medicine/ Osteopathic Manipulative Medicine, Integrative Medicine and Pain Medicine. She went to the City University of New York for her undergraduate training, where she also graduated with honors. Prior to her medical career, Dr. Caron was a professional modern dancer and toured the world. Most of her dance career was with Bebe Miller and Company. She has taught Osteopathic Medicine at the University of New England, Western University and New York Institute of Technology as well as starting an Osteopathic residency at Good Samaritan Hospital in Corvallis, OR. In addition, she has taught nationally and internationally for the Biodynamic faculty and individually. She also founded a private practice in New York. She now resides in Talent with her dog Larissa.

Greg Yesensky, D.O., M.S. is from Binghamton, NY. He was educated in the Catholic school system and was recruited for Division 1 football at the University of New York Buffalo where he had a full sports scholarship. He graduated with honors and went on to get his Masters in Immunology. Dr. Yesensky attended the New York College of Osteopathic Medicine and did his residency in Family Practice/Osteopathic Manipulative Medicine at St. Barnabas Hospital/ Weil Cornell in the Bronx, NY which he is board certified. He also has a subspecialty in HIV/virology. After residency, he continued his career with an emphasis on serving the underserved in community-based clinics with Hopi Indian Reservation in Arizona, then the homeless population in Los Angeles, CA. He was Medical Director of the county health clinic in Napa Valley prior to moving to Medford where he lives with his wife and two children. Dr. Yesensky is part of the Biodynamic faculty and has taught nationally and internationally. He has been integral in editing and working with Dr. Jealous on his manuals and publications.

Both Dr. Yesensky and Dr. Caron have over 20 years of clinical experience. They both treat all ages including pediatrics.