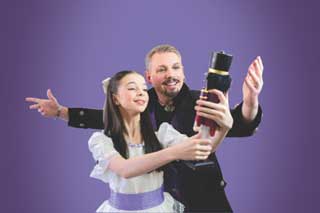 Southern Oregon ballet enthusiasts are in for a holiday treat this December. 2019 marks Studio Roxander’s 10 year anniversary as Southern Oregon’s professional ballet school, as well as their 10th annual production of The Nutcracker.

Since 2009 Studio Roxander – Academy of Ballet has been offering professional ballet training to dancers in Southern Oregon. As they celebrate their 10th anniversary, the caliber of dancer produced by the studio continues to rise. Just last Spring they placed two graduates in the highly competitive professional dance world and they are both dancing with the PA Ballet. Studio Roxander’s staff and students have been recognized and received awards from the Youth America Grand Prix ballet competition, which has sparked national and international interest in their program. In fact in April of this year, one of their students (son, Jake Roxander) was chosen by Dance Magazine as “One of the 7 Youth America Grand Prix Competitors to ‘have your eye on.’”

Over the past decade Studio Roxander has “wow”ed patrons with their fun family -friendly production of the Nutcracker and has built an audience that enjoys returning each year to see “what’s new”! This year will be no different. Studio Roxander will not only showcase their home-grown talented students, but will also feature professional guest dancers from The Pennsylvania Ballet in the rolls of the Sugar Plum Fairy and her Cavalier. Opening weekend the guest artists will be principal dancers Mayara Pineiro and Zecheng Liang. Closing weekend the guest artists will be first soloist Nayara Lopes and soloist Ashton Roxander (the eldest son of Studio Roxander’s directors and graduate of their training program).

Studio Roxander’s production of The Nutcracker has grown from a small cast of 50 with only two performances to their current cast of over 100 and 8 performances to choose from over two weekends. A Southern Oregon favorite, this production was twice honored with the title of “Best Performing Arts Production” by the Sneak Preview readers.

The Nutcracker will be presented at the Crater Performing Arts Center in Central Point on Friday December 13 and 20 at 7pm; Saturday December 14 and 20 at 1pm and 7pm; and Sunday December 15 and 22 at 1pm. Reserved seating runs $18-$26 with discounts for children under 12 and seniors. Tickets are available now online, over the phone or in person at Studio Roxander in downtown Medford.