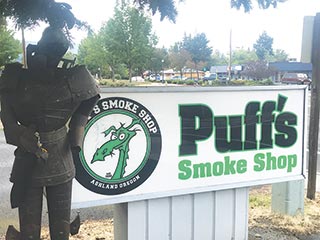 Back in the mid 1990s, we used to take the kids to Goodtimes (near the Ashland Street overpass) to play video games, chew on candy, and sometimes stay for dinner. It was only two blocks down the street from us, and it was a fun, family-friendly atmosphere. The owner was Mike Welch, and he was determined to make the business work, but the times they were a’changing, and in 1998 Mike decided to move on by opening Puff’s Smoke Shop, a traditional tobacco/smoke shop in the Rite-Aide parking lot, and then later to its current location at 1796 Ashland Street.

“Six years ago we were able to open as a medical marijuana dispensary,” Mike said. “In fact, we were the first dispensary in Ashland. I have worked closely with the City on ordinances around medical cannabis, but after the rules changed along with recreational sales, we were considered too close to a school. That’s when we decided to go back to the original smoke shop.”

Customers can expect great customer service at Puff’s Smoke Shop and a knowledgeable staff. That includes manager Natty Mickey, who moved to Ashland in 1999 from Phoenix, Arizona.

“When I got news that I was pregnant, I knew that Phoenix was not where I wanted to raise my child,” Natty said. “My older sister was already here in southern Oregon starting her family, so that seemed like a great option. And here I am two kids and twenty years later.”

Some comments on Yelp:

“My experience was great at this establishment. The layout and interior are welcoming, classy and easy to navigate. I was shopping for gifts, and the manager was very helpful, friendly, suggestive, and had a great sense of humor.”

“Friendly, knowledgeable staff who take the time to explain the products in detail. A nice stop when you’re in Ashland and in need of any supplies.”

“Other smoke shops I’ve visited have been cluttered and crammed with lots of stuff and too intimidating. Puff’s was a comfortable experience, and I will avoid the other tacky stores and return here for future purchases.”