Zoë Williams: The Future of Good 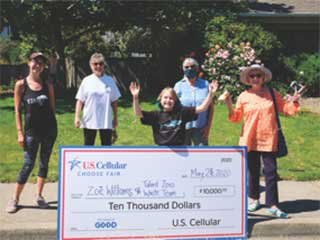 On May 28 U.S. Cellular announced Talent youth, Zoë Williams, as one of three recipients for the second and final round of the company’s The Future of Good program. Zoë was selected out of thousands of nominations from across the country as those who are bringing fairness to their communities. As a selected recipient, she will receive $10,000 to further her cause.
This recognition was revealed to Zoë via a surprise celebratory parade past her home. U.S. Cellular representatives – along with local law enforcement, individuals representing the groups she works with and many family members and friends – honked, waved, shouted and held signs as they drove by. Zoë received an oversized $10,000 check and a celebration kit, featuring technology items, a backpack, water bottle and note congratulating her on being The Future of Good.

Zoë, age 10, is being recognized by U.S. Cellular’s The Future of Good program for her work to eliminate plastics in her community and protect our oceans. Starting three years ago, she began organizing monthly clean-ups to dispose of littered plastics. From there, she joined the Talent Zero Waste Team and helped that group convince their City Council to ban plastic to-go items. Zoë has presented at local elementary schools and wrote a children’s book called Coral’s Quest to help other kids understand how harmful single use plastics are to our oceans.

“We are very excited to be able to gather in celebration of this amazing young humanitarian,” stated Erryn Andersen, Director of Sales for U.S. Cellular in the Northwest. “Zoë’s efforts, along with the others recognized through the company’s The Future of Good program, inspire and motivate us to do what we can to promote fairness in the communities we serve.”

The TNR had a chance to ask Zoë a few questions:

When did you realize your love for the ocean?
When I was 4 years old I started collecting all the shark books I could.

What inspired you to take a stand against plastic pollution?
When I was watching all the posts from other shark and ocean conservationists on Instagram, they would share posts about the plastic they were finding on the beach and talk about how bad plastic was. Then I saw that animals were dying from plastic and I knew I had to start educating people.

What sort of things have you been doing locally to fight pollution?
I started by doing trash clean-ups with my friends. It’s hard to get people to come help so we don’t do them very often. I also started talking to elementary school classes about plastic pollution. I realized I needed to try and reach people who don’t live here, so I wrote Coral’s Quest last year.

How did you come up with the idea to write a book?
My mom met an illustrator from North Medford High School named Sandra Aros. She made a painting that my mom shared with me of a girl swimming in the ocean with plastic fish. It made me want to write Coral’s Quest, so I sat down and started to write it!

Explain how you felt when you were surprised with the parade and award…
I was very confused at first since it wasn’t my birthday or anything else. I didn’t understand why everyone was there for me. When I saw the check, then I knew what it was for and I was excited to have such a fun surprise!

How will you utilize the $10,000 prize money?
US Cellular says it’s to help me with my local organization that I work with. So it means I get to give it to the Talent Zero Waste Team. I have been a part of the team for over a year now. Since we all work hard to eliminate plastic from our town, this is where I want the money to go. We are planning to talk to the Talent/Phoenix School District about helping them eliminate plastic utensils and replace them with reusable utensils in ALL their schools.

What’s next?
I don’t know! I would like to work on starting up clean-ups again, but it’s hard to get people to help. I would love to write a second book about Coral. She would be trying to help animals in captivity or share how climate change is also hurting the earth and ocean.

I think it is important for people to know that it’s easy to switch to reusable items. Just start with one thing like your straw or coffee cups, always bring them when you go out to restaurants. Then start adding new things to your reusable kit like utensils or to-go containers. Like Coral says in my book, “It only takes one person to make a difference.”