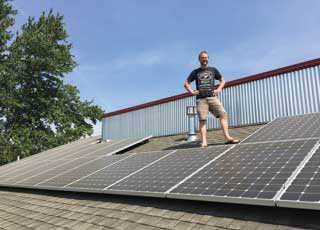 We recently had the chance to ask Flywheel owner Ian Bagshaw a few questions about his commitment to offsetting his Talent bike shop’s electricity usage with solar.

What inspired you to make the move to solar?
I have a childhood memory of a solar powered miniature fan demonstration and just thinking how unbelievably cool it is to power things with sunlight. At that time, it seemed mostly useful as a science experiment- the fan blades went around but really didn’t move much air. The possibility of running an entire business off of that same energy source is just awesome. As Flywheel’s energy needs have grown with the addition of beer and wine bar related equipment, it became evident that going full offset would have a bigger impact. Additionally, with the increase of electric assist bicycles on the road, it occurred to me that an electric bike charged by solar is about as clean as it gets for motorized transportation. Flywheel is committed to providing a full offset e-bike charge station within the next year.

Do you think this is a viable option for other businesses in the Valley?
I do think this is a very viable option for other businesses that do not have massive energy needs. Prices are getting to the point that a payment on a solar system is not dramatically more than an existing electric bill. I also firmly believe that moving to renewable energy is important even if it is in incremental steps. If a small business can only install a partial offset solar system due to budget or sun exposure constraints I think it is still totally worth pursuing.

Why did you recently start carrying electric bikes?
I have been in the bicycle service industry long enough to remember the first attempts at electric assist bicycles and frankly they were pretty awful. In the last several years I have seen amazing improvements to the hardware and in turn improvements to the user experience. We carry Civia Cycles which use a Bosch drive system and Yamaha which makes their own drive system as well as the bike itself. Both drive systems are a mid or crank based pedal assist system. What this means is that you end up with a well balanced bike with a stable, low center of gravity and tire fixes that are no different than an unassisted bike. The experience of riding them is simple and just plain cool. If you know how to ride a bike there is no learning curve. We currently offer test rides and will be adding a demo model or two that will be available for longer rides. If you have not had a chance to try a modern electric assist bicycle you definitely should!

What other sort of changes are in the air at Flywheel?
As I mentioned earlier, an e-bike charge station is in the works. People will be able to stop by for a beer chilled by the sun and charge their e-bike battery via solar energy. Another technological advancement that we are super excited about is smart training stands. If you have ever spent time on a stationary bike or on a training stand bike, you probably know how mind numbingly boring the workout can be. We have a room set up at Flywheel for demonstrating virtual riding. When paired with any number of apps or programs such as Zwift, smart training stands allow a rider to experience something much closer to riding outdoors without dealing with rain, snow and, more recently, smoke. Most of us still prefer to ride outdoors but when time or the weather does not cooperate, smart training stands are pretty amazing. If you would like to give it a try just give us a call to make an appointment.

As excited as we are about the changes and additions at Flywheel, we are as committed as ever to providing stellar bicycle service with quick turn around time. We continue to provide a relaxed gathering place for cyclist and non cyclist alike to enjoy a cold brew—and on most Wednesday nights, fantastic local food truck fare.