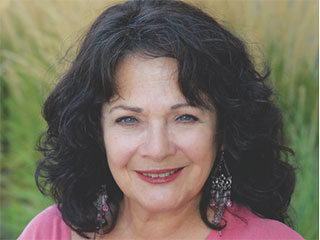 After nearly fifteen years as the artistic director of the Camelot Theatre, Livia Genise is moving on.  The actress and director is starting her own non-profit theater company in the Rogue Valley and has her first production slated for the fall.  Though Genise had intended to leave her post at Camelot at the end of the 2016 season, circumstances at the theater changed and she made the decision to depart at the end of March.  Still, she says, working at the theater has been a great ride.  She says the relationships she forged there are still important to her.

“We drew in some incredible talent! The people I worked with, the other directors, the choreographers, the musical director, we were and are a family.”

She says that human capital is what made the theater a success over the past fourteen years.  She says the team was constantly pushing to be better.

“We did some incredible theatre.  The audience was constantly saying ‘that was the best thing you’ve done yet.’ And that was kind of my personal goal, that each production…and we did twelve a year…would be better than the last.”

It isn’t just the large productions that Genise says she is proud of.  She says there is more to keeping a theater running than flashy mainstage extravaganzas.  The small-town nature of the Rogue Valley means you have to get creative to keep the doors open.

“I started the Spotlight Series because we had too many dark weekends.  And when the theatre is dark, there’s no income.  So we would put a spotlight on let’s say, a specific composer, like Cole Porter.  A famous artist, like Simon and Garfunkel.  Or a specific genera like maybe the blues or musical theatre.”

Genise says musicals, which were not in the playbill when she arrived in Talent, became a pillar of Camelot’s success during her time there.

“The first years I was there we did five plays and two musicals, but the musicals bring in so much more audience.  So where we were when I left, we were doing four musicals, three plays, four spotlights, and the conservatory production.  So the only time we were dark was during the seven weekends when we were doing tech for the mainstage musicals and plays.”

But keeping the a theater rolling at that rate wasn’t without its challenges.  Genise says she is glad to be focusing on smaller projects.

“It was a pretty full plate and in some ways I’m glad to not have the responsibility of getting people into the seats.”

Though it may be a relief now, Genise says she was grateful for her involvement with the community at Camelot over the years.

“I would welcome the audience in with a curtain speech, and then the actors at the end of the show would be standing by the concessions counter to thank the audience for coming and I think a lot of people felt like they were part of the Camelot family.  And I think that’s why when the City of Talent was building the roundabout and they had to go through the property the theatre was on, the theatre was able to raise two million of the two point five needed to build the new theatre.”
Genise says that new facility is part of what has made the theater great.

“You are going from a hundred seat house to a hundred and sixty four seat house and the quality of what you’re doing had better increase, because all of the sudden you’re in a state of the art facility.”
Despite the new facility and many great working relationships, Genise says she knew it was time to move on in March when artistic differences were causing conflict for her.

“I resigned on the 31st because they cancelled the production of Chess that I was in preproduction for.  I was going to stay through the end of the season.  Then when the board decided they could make artistic choices I decided I was superfluous there, so I resigned.”

Genise says that while she is proud of her work with Camelot, she is relieved to be pursuing other projects.

“In some ways I’m incredibly relieved.  In other ways I’ve been there fourteen and a half years.  I got the theatre from eight thousand in patronage to over twenty six (thousand) the past couple of years.  So if I don’t know what I’m doing, then what was I doing all those years?  I felt there was a total lack of support from the board and a vote of no confidence from them, so I decided not to stay any longer.”

Genise says she feels semi-retired now despite a busy schedule of auditions in the Portland area.  Additionally, she is working on two directing projects, including the production of Chess that was cancelled at the Camelot Theatre.

“I’m actually taking the show the board cancelled and I’m performing over two weekends in Ashland under the umbrella of the Ashland Contemporary Theatre.”

Genise’s production of Chess is slated for four performances this fall.  Two will be held at the Ashland Community Center on September 17th and 18th and two at the Bellevue Grange the 24th and 25th.  Genise says all but two cast members from the defunct Camelot production will be performing in the new endeavor.  Genise says she will be working with the Ashland Contemporary Theatre while she sets up her own non-profit theater company.

“It will be based in Ashland, and called simply ‘Livia Genise Productions.’ “

The simplicity of the new project appeals to Genise, who has had a busy career.  In addition to her work with the Camelot Theatre, Genise has been on Broadway twice, and during the 1970s she was a familiar face on national television with roles in Three’s Company, WKRP Cincinnati, Days of Our Lives, Kojak, and Hill Street Blues.  She says simplifying her life is part of what brought her to the Rogue Valley in the first place.

“I did a lot of work in LA, and then my husband and I decided to have kids.  He got hired at the Oregon Shakespeare Festival, this was in 1983, and we decided we absolutely loved Ashland.  I actually went back to the bay area and worked there for almost ten years after we got divorced. And I was acting and directing and I started conservatories.  A lot of different stuff.” But Genise says the draw of the Rogue Valley remained strong, and after eight successful years in the Bay Area, she decided to return.

“Literally, the day I was driving back to the Rogue Valley, my cellphone rang in the cab of this twenty-six foot diesel truck I had rented, and my daughter picked it up, and it was the board of Actor’s Theatre asking me to come in on Monday for a seven show season and they hired me pretty much on the spot, and I took over Actor’s Theatre and eventually it became Camelot.”

But now, says Genise, she is looking for a different kind of opportunity.  She says that while large theatres are a great thing to have in small towns, there are certain types of productions that have a hard time filling seats for extended runs.  Genise says she would like to do edgier performances that she feels might be more important socially than some of the grander productions that aim to entertain.

“At Camelot I was kind of limited with how edgy I could get because I had to fill the theatre.  So I would do one edgy play a year and one edgy musical, and then I would balance that out with something like Arsenic and Old Lace or Fiddler on the Roof.  So what I want to do with Livia Genise Productions is more staged readings and concert versions of plays and musicals that I couldn’t do at Camelot because I didn’t think I could run them in the valley for four, five, six weeks.  So that’s my goal for now is to do four productions a year, but I’m not looking for a permanent space.  I’m not looking for the overhead and the cost.”

Genise says she doesn’t see the lack of a permanent space as a barrier to putting up the type of production she envisions.

“There are a number of performance spaces, especially for staged readings or concert versions.  I don’t need costumes, I don’t need a set.  It’s just the artist and the audience.  And to me, that’s the best kind of theatre.”

Genise has several shows in mind already and is exploring how and when to bring them to production.

“One of the plays I want to do is God’s Country because it is once again timely.  It the true story about the murder of Jewish talk show host, Alan Berg, by white supremacists.  One of the musicals I would like to do is Parade, which is a Tony Award-winning musical about not-happy subject matter, again based on a true story.  But the score, the writing, everything about it is exciting.  You know in Portland, San Francisco, or Seattle you could run it for four to six weeks, but not so much in the Valley.”

While she plans to devote a substantial amount of time to the new endeavor, she says there are other things on her mind as well.

“I’m really excited about the promise of the future.  I’m going to be sixty seven and life is wonderful.  I don’t have the stress level I’ve had for fourteen and a half years because I would often work seven day weeks for weeks on end.  You know, this morning I went hiking, and then I went to the gym, and then I took a nap, and now I’m going to read a book for the evening.  So it’s very different from the life I had before.”