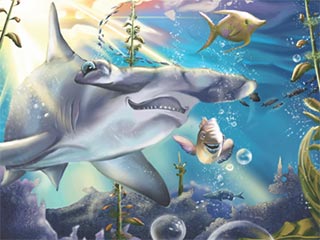 Writing (and finishing) a book is unusual for children to do. Not only has nine year old Zoë Williams accomplished that, she’s also addressing the plastic pollution crisis through her book.

Zoë wrote a children’s book about a Hammerhead shark magically transforming into a human in order to save the world from plastic pollution. This is the first book she has finished, but not the first book she’s started. “Zoë has always wanted to write books,” says her mom Kristan. “She used to take several pieces of paper, fold them in half and staple them in the middle, then start writing her story. Then about a year and a half ago, she wrote a story about plastic awareness, sharing her concerns and offering solutions.”

Zoë’s goal is to educate people on how to better take care of sharks, the ocean, and the world. She started the book in February of this year and finished it at 38 pages. For Sandra Aros, who created the art for the book, this is the first book she’s illustrated. Kristan, a producer for Student Showcase at SOPTV, met Sandra at North Medford High School when she was showcasing her art class. “The second I saw her work, I told her she should be a book illustrator and she said that was exactly what she wanted to do,” says Kristan.

As soon as Zoë and Aros teamed up for the book, Aros got to work illustrating. Her pictures are colorful under water and above ground landscapes filtered with bright colors and fish. She says a challenge has been making sure Zoë’s story is represented well visually, as well as page layouts, and revisions. “I love doing these things, I just didn’t know there was more to being an illustrator because I am new to this!” she adds.

Kristan says the biggest challenge for the book has been raising the money in order to publish it. “The hardest part has been the money, which is why we are doing the Kickstarter,” she says. “Sandra has been doing all her illustrations for the love of this project. We are hopeful we will raise enough money to get the books printed. Then we hope to have enough profit to pay Sandra and have some money still available to donate to shark and ocean conservation.”

So far the Kickstarter page is almost halfway to the $5,546 goal, ending on Aug. 18. If the goal isn’t reached, the project will not be backed. Zoë offers different levels of incentives to backers based on donations, like a hardcopy of the book, signed copies of the book, or all of those things including a metal straw to encourage a plastic-free lifestyle.

The page has a video of Zoë explaining her idea, her passion, and the purpose for the book. In-formation about the publisher, Aros, and what backers may receive if they donate is on the page as well. When it comes to the overall impact of the book, Zoë says, “I hope the people who read it spread awareness and stop using plastic.”

Aros hopes her artwork will attract people to the book and educate them on this global crisis. “Because people like seeing artwork, I’m hoping that they can get the message that plastic is pol-luting our oceans and that you don’t have to be a scientist to help out with keeping our oceans clean. I’m hoping that children and adults can be inspired enough to take action to save the oceans.”

Kristan says this entire process has been just rewarding as it has been challenging. “It was really important to me to show Zoë that you can make something happen if you really put your heart into it,” Kristan says. “And she has!”

To learn more about “Coral’s Quest” and to make a donation, go to https://www.kickstarter.com/projects/sharksareourfriends/corals-quest.