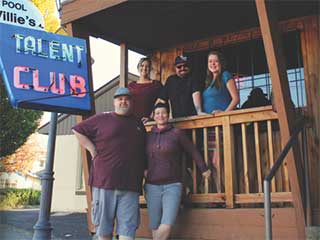 Last October, Kandice Daly took over ownership of The Talent Club and immediately teamed up with Larry Coble to manage the music side of the business. The result has been an influx of energy and top notch musical acts at the iconic Talent watering hole.

The Talent Club opened in 1905, making it one of Oregon’s oldest running bars. “Rumor has it, the original structure was a two story building, located up Wagner Creek Road with a brothel occupying the second floor,” Kandice said. “When it was time to relocate the bar, it was rolled down the hill on logs to its current location. During the Great Depression, a woman owned and operated the bar, displaying a sign on the door that read: ‘If your kid’s got no shoes, you ain’t gettin’ no booze.’” The current building was re-built after a fire destroyed the majority of the initial structure.

Before becoming a bartender at the Talent Club in 2011, Kandice had never worked in the food or alcohol service industry. She had experience running a rock engraving company and worked as a teacher assistant at a preschool, but bartending was new to her. “It was a situation that fell in to my lap, and as time went on, I knew I wanted to be the owner someday. When I teamed up with Larry to manage the music side, I knew it was going to work. We’re having a great time creating the space, learning together, and laughing the whole way through.”

The Talent Club is truly your small town neighborhood bar with an auditory twist. Since taking over ownership last October, their main focus has been to bring spectacular live music to the Rogue Valley, and they’ve done just that. They’ve added a fully equipped sound system and stage and have been bringing top acts traveling the west coast.
“Customers can expect a warm, laid back, dive (but very clean!) bar experience,” Kandice joked. “We pride ourselves on welcoming all types of people with very diverse backgrounds. If you enjoy drinking delicious beer, wine, and/or cider while often listening to amazing musical performances, then you should come check us out. Throughout the fall, winter and spring months, we often have one to four musical performances per week. We’ve had people from all over the country travel to our sweet, small town solely to come perform and/or listen. In addition to live music, we’ve hosted comedy and burlesque shows.

They also offer four flat screen TVs on which you can expect to see MLB, NFL, NBA, NHL and many other professional sports.

“We have arguably some of the best beer and cider selection in the valley, offered both on draft and in bottle. You also have the choice of purchasing a wide selection of bottled beer, wine, or cider to carry out.”

They are currently a cash only business and hours are 10:30am-Midnight Sunday through Thursday (unless there’s a late show) and 10:30am-2am Fridays and Saturdays.

Join them for Happy Hour: 4-6pm, Monday through Friday.