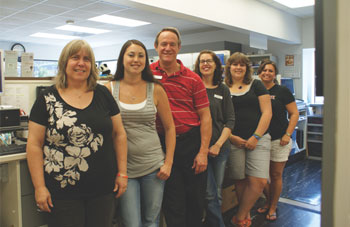 Later this month, Medicap Pharmacy located at 205 North Pacific Highway, will become the only full-service pharmacy operating in Talent. Co-owner and pharmacist Rick Chester hopes those who require pharmacy services in the future will give Medicap a chance to earn their business. "Since we accept nearly all medical insurance plans, insured customers will pay the same copay with us as they have paid at the big box store," Chester said. "And cash customers on maintenance medications pay $12.99 for a 90-day supply of many generic drugs. Cash paying customers taking non-maintenance medications often comment on the fact that we beat the big box prices. If you give us a chance, I believe you will be pleasantly surprised."

Unlike your grandmother's pharmacy, Chester and his coworkers don't wear a white smock, and they listen to rock and roll music all day. "While our customers spend five to fifteen minutes in our store, we are there all day," Rick said. "Consequently, working in a happy, healthy, and friendly environment is important to us. We know most of our regular customers by name, which is rare in big box pharmacy."

Also rare is Chester's holistic approach to health. "Our pharmacy is unlike any within a hundred miles," Chester said. "I interned in a small pharmacy in the eastern Oregon town of Nyssa that also doubled as the community-meeting place, where people came to drink a cup of coffee or order a root beer float. That experience instilled in me the idea that pharmacists play an important role in the health care needs of the community. Toward that end, I make myself available to answer customer questions, and offer practitioner referrals when necessary."

Unlike his other pharmacist colleagues, Chester is able to discuss alternative options as well as conventional solutions to their health problems. "I have personally transformed over the years from a conventional pharmacist, physician, and healer, into a guide, or conduit who helps people on their journey to better health," Chester continued. "After fifteen years of college and years of hands-on practice, I provide information that is not found in any other pharmacy setting."

After graduating from Oregon State University in 1980, Chester started working in a chain store pharmacy, quickly becoming a manager for a Safeway pharmacy in Redmond, Oregon, where he experienced first-hand the meaning of polypharmacy. "Polypharmacy is a term used in business for the over-prescribing of medications in a single individual," Chester explained. "I decided that I wanted to help people to get off of their medications, but I didn't have any idea what they would do instead of taking drugs." His search led him to Seattle, and then eventually to Portland where he earned his third degree, a doctorate in naturopathic medicine (he also has a Masters in Acupuncture and Oriental Medicine).

Because of Chester's diverse background, Medicap doesn't just offer the usual over-the-counter medications, but also stocks a large supply of homeopathic remedies, Western and Chinese herbs, nutritional supplements, and natural health and beauty aids. They also compound prescriptions that are tailored to the individual needs of the patient, including hormone replacement therapy, topical pain relievers, and veterinary products.

"Despite higher fuel costs and wages, we still offer free local delivery on Mondays, Wednesdays and Fridays," Chester said. "And our drive thru window is invaluable to parents with sick children, elderly customers with difficulty walking, and people who want to avoid inclement weather."

Medicap Pharmacy opened at its current location in February 1997, although Gordon and Martha Bertelsen first brought the business to Talent a few years before that date. It was originally located near the Grotto. Chester became a partner in 2007, and has managed the operation for the past six years. For more information, call 541-535-5843.