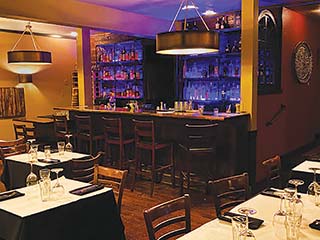 It’s been an interesting ten years for the Gibbs family. First, owners Michael and Laurie Gibbs welcomed their son Drew into the Winchester Inn and Restaurant (35 S. 2nd) as a co-owner. Drew grew up in the business and found a calling in the world of wine, going on to become a certified sommelier through the Court of Master Sommeliers. In 2013 he accomplished a major rebranding of the Winchester’s restaurant and helped to usher in Alchemy Restaurant, complete with a newly remodeled and spacious bar.

To aid in that transformation, the Gibbs’ recently hired a new executive chef, Michael Bryant, who grew up in rural Virginia with his mother, a French immigrant, who instilled in him an appreciation for ingredients, seasonality, and the hunger to try new things. He has worked at notable places like Cliff’s Edge, Joe’s, and Bin 8945 in Los Angeles. He has also made appearances on Chef Wanted, Knife Fight, and Chopped. He and his wife Sarah, who doubles as the restaurant’s “amazing pastry chef,” moved to Ashland in March of this year, making the trek from Los Angeles in hopes of a more calm and idyllic place to raise their family.

The Winchester Inn is actually celebrating 39 years in business this year. Michael and Laurie moved to Ashland from Carmel, California, in January of 1983 and opened the Winchester Inn and Restaurant that year. Both had spent years in the restaurant industry, so they weren’t rookies. Drew was born and raised in Ashland and after traveling, he found that there were few places more unique and amazing than the valley that he grew up in.

“Alchemy is located on the main floor of the Winchester Inn, which is a 21-room boutique hotel surrounded by English tiered gardens,” Drew said. “We offer year-round luxury lodging and breakfast to any and all that are passing through or need a getaway.”

Meanwhile, just across the street at 36 S. 2nd, another popular local restaurant, Smithfield’s, was for sale, and early last year, the Gibbs’ became the owners.

“We spent months contemplating what we thought was best for the space, and on November 19, Chateaubriand 36 opened,” Drew said. “It is a reimagining of a marriage between a country steak house and a classically-styled French bistro. It strives to bridge the gap between fanciful and grounded. With the eponymous chateaubriand dish as a focal point, the kitchen offers everything from burgers to escargot. The dining room welcomes you with a soft warm dining area, with a butcher block bar top and reclaimed-wood back bar.”

Across the street, Alchemy retains its own charm. “With the outside Victorian trimmings and modern stylings in the dining room and bar, Alchemy has been the special occasion choice for locals and tourists for years,” Drew said. “We strive to find new and exciting iterations of cocktails, wines, and cuisine for the foodies in all of us.”

And then, of course, there’s the country inn, which has won numerous awards. “Attention to detail, and hospitality above all else, has been our mission for 39 years,” Drew said. “Our belief is that it is the little things that make the experience something truly memorable. We are here to make sure everyone feels welcomed, taken care of, and wowed. We especially want to wish everyone a wonderful new year.”